How best to use biomass?

US researchers have developed an efficient way of turning renewable resources like vegetable oils - and potentially biomass - into hydrogen-rich gas. The gas could be converted to synthetic fuels and industrial chemicals, or used in fuel cells.

The catalytic process avoids problems that had discouraged previous researchers - like an unwanted buildup of soot which would clog reactors and deactivate catalysts. 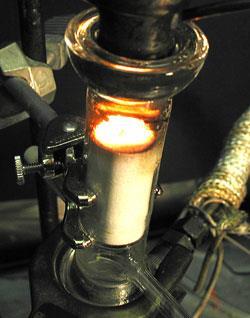 Closeup of the reactor operating. Insulation surrounding the perimeter of the reactor tube is removed to show the catalyst surface in the photograph.

The scientists spray oil droplets onto a ceramic foam cylinder coated with a rhodium-cerium catalyst heated above 800?C. As the droplets hit the surface, high temperatures rip apart the oil’s triglyceride components into smaller vapourised compounds. These flow through the porous cylinder, together with injected oxygen, to become ’synthesis gas’ (hydrogen and carbon monoxide). The rapid vapourisation leaves no time for droplets to be burnt to soot, while oxidising reactions generate enough energy to make the process self-heating.

From these oily beginnings, the researchers hope to extend their method to convert cellulose, starch, and lignin (from woody plants). ’We hope that people will look at this reaction and think it might be a better way of using biomass,’ co-author Paul Dauenhauer told Chemistry World. The technology, he said, might be scaled up to larger systems, or could be run on small farms, avoiding transport costs. And the hydrogen produced could be used in fuel cells in a future ’hydrogen economy’, or the rest of the gas might be transformed into synthetic fuels.

’I think it is a significant but not necessarily a revolutionary development,’ cautioned Ted Krause, of Argonne National Laboratory, Illinois. There are many ways to convert biomass into useful fuels, and it isn’t yet clear that the American team’s small-scale process provides significant advantages.

As Tony Bridgwater of Aston University Bio-Energy Research Group explained, biomass can be fermented or digested by enzymes to make ethanol, or chemically altered to produce fuels such as biodiesel. And it can be broken down by high temperatures to create gases - for use in turbines, or for transformation to synthetic fuels - or liquids which can be stored and later gasified.

The American researchers’ reaction takes the high temperature route to convert oils (and potentially waste biomass) directly to gas. ’It’s a nice variation on a fairly well-established theme,’ Bridgwater commented. Approaches that convert biomass to gas or to liquids for use as biodiesel are far more commercially developed, he pointed out.

The American researchers’ process may well be more efficient than these developed technologies, but it remains a proof of concept. Schmidt’s team is hoping to reduce the amount of catalyst they use, or switch to cheaper metals. If they can work out the reaction’s exact mechanism, and show that cellulose or lignin could be converted by the same process, then their promising technology could take on commercial significance.

Rodney Townsend calls for chemists to get closer to consumers.