Humans may sense light through skin

A team of researchers from Europe and the US has shown that a type of protein molecule found in many different human tissues can respond to light. The finding raises the intriguing possibility that humans might be able to detect light through skin as well as the eye.

Margaret Ahmad from the University of Paris VI, France, and her colleagues focused on a class of photoreceptor proteins called cryptochromes, which are activated by light in plants and trigger a number of physiological responses, such as maturation of seeds and unfurling of leaves. Cryptochromes are also found in insects and mammals, including humans. But until now no-one has known whether human cryptochromes react to light. 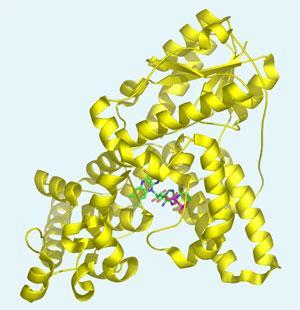 Ahmad and her team used a range of spectroscopic techniques to show that the pigment flavin is the photoreactive component of the human cryptochrome, as it is in plants, and that in its resting state it is oxidised, becoming reduced in response to blue light.

The researchers then examined the response of human cryptochrome to light in a genetically engineered strain of the fruit fly Drosophila. They showed that in a living organism the protein also changed when it was exposed to light. ’These results provide the first evidence of how animal-type cryptochromes are activated by light in living cells,’ the researchers say.

Charalambos Kyriacou, an expert in biological clocks at the University of Leicester in the UK, remains cautious about ascribing a light-sensing role to cryptochromes in non-visual cells in humans. ’In humans we know that blind people do not have a body clock at all, and that all the evidence so far says that we can only sense light through our eyes,’ Kyriacou says, pointing out that in the fruit fly cryptochrome molecules in nerve cells act as light receptors while identical molecules in other tissues do not. It is possible that the light-sensing properties of the molecule are repressed depending on the cellular environment of the cryptochrome, Kyriacou suggests.