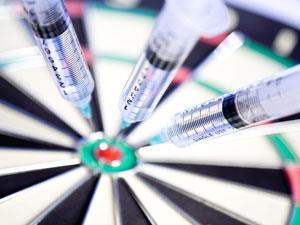 Hydrogels of cancer drug taxol injected directly into tumours have been shown to be more effective at inhibiting tumour growth than intravenous taxol injections of four times the dosage.

Taxol is used to treat many forms of cancer, including breast, lung and ovarian cancer. Its administration is typically every three weeks by intravenous injection and it can take several hours to achieve the required dose.

Hydrogels have great potential to reduce the dosing frequency of chemotherapy. They can hold exceptionally high drug loadings that are released in a controlled and sustained manner. However, synthesising such hydrogels is complex, ultimately resulting in low yields.

Zhimou Yang and fellow researchers at Nankai University in China have successfully simplified the synthesis of taxol hydrogels. Their hydrogel contains taxol conjugated to folic acid. The folic acid facilitates tumour targeting as many cancer cells have folic acid receptors so the hydrogels will sustainably release their taxol cargo through ester bond hydrolysis at the site of cancer cells.

Yang says a solid phase peptide synthesis they have developed to make a precursor to the folic acid–taxol conjugates is the key to the improved synthetic strategy. The folic acid–taxol conjugates are prepared in just two steps, with yields of approximately 40% and do not require complicated purification steps. This is a vast improvement over their previous work where five steps were required and yields were less than 10%.

‘The gel formulation not only allows for extended release of the drug but also facilitates delivery and retention within the tumour,‘ says Joel Collier, a synthetic biomaterials expert at the University of Chicago in the US. ‘Because of the excellent control over release kinetics for these types of materials, this strategy could be widely useful, even beyond cancer therapeutics,’ he adds.

Vitaliy Khutoryanskiy, a reader in pharmaceutical materials at the University of Reading in the UK, finds the concept of making taxol-containing hydrogels interesting. However, he says that injection of a liquid taxol formulation that is converted to a gel in situ by elevated levels of glutathione in tumour cells could be more feasible for medicinal applications.

Extending this approach to other drugs and in situ gel formation seem likely avenues for further exploration.