Identifying the cause of pregnancy loss

A protein has been identified as a possible indicator of recurring pregnancy loss by scientists from Korea.

Kwang-Hyun Baek from CHA University, Seoul, and colleagues found that ITI-H4, a protein found in the blood whose function is unclear, was fragmented in the blood samples of patients suffering from recurrent pregnancy loss (RPL).

’RPL is the loss of at least three consecutive pregnancies after 20-28 weeks,’ explains Baek who adds that over half of the possible causes are unknown. ’We have seen a number of patients suffering from RPL without knowing the cause,’ he says.

To look for differences between RPL patients and patients with no pregnancy complications, the team compared their blood samples. They used electrophoresis - a technique that uses an electrical field to manipulate charged particles - to separate mixtures of proteins in the blood and examined the separated proteins spectroscopically. They found that a fragmented form of a protein called ITI-H4 was present in the blood of patients with RPL, but not in the control samples. ’ITI-H4 can be used to detect RPL patients by simply screening for the proteins’ presence in the blood,’ says Baek. 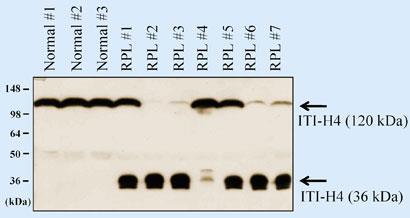 Western blot analysis of ITI-H4 in RPL and normal patients. The fragmented ITI-H4 (36 kDa) was detected in 19 out of 29 RPL patients

’There is an enzyme that will clip ITI-H4 to give the fragments they are detecting. There must be an increase in the enzyme’s activity with the miscarriages,’ says Rodney Geisert, who studies reproductive physiology, in particular uterine function, maintenance of pregnancy and embryonic loss in pigs at the University of Missouri, US. ’This enzyme activity is something we see in pregnant pigs and we could compare that to humans, but it’s a different type of placentation.’ He suggests that the enzyme could be plasma kallikrein, which cleaves peptide bonds in proteins.

Geisert adds that there isn’t much literature about the function of ITI-H4, but he says that the molecule has a lot to do with binding and adhesion. In the pig, it forms the attachment between the placenta and the uterus, he says.

Baek hopes to develop a diagnostic kit to screen RPL patients. ’In the long term, we would like to develop a therapeutic approach to suppress the risk of RPL,’ he adds. ’We’re not sure whether the fragmentation of the protein ITI-H4 is the result or cause of RPL so identification of its cellular mechanism is required to develop therapies.’

’With the technology we have today, this could be assayed easily,’ concludes Geisert. ’It would be very useful if it is truly a marker.’