A team of international scientists studying the role of iron in the storage of carbon under the ocean have confirmed that natural iron fertilisation increases the rate of carbon capture. However, the group’s measurements conflicts with previous studies - and adds to ongoing concerns over planned experiments to artificially fertilise the oceans with iron as a tool to cut carbon dioxide from the atmosphere.

Iron’s role in the ocean carbon cycle is to promote the growth of phytoplankton, which remove carbon dioxide from the air through photosynthesis. Whilst most of the carbon in the resulting biomass will re-enter the atmosphere through the carbon cycle, a small amount will fall into the depths of the ocean as the plankton dies, effectively locking away that carbon for up to 300 years. The theory is that the more phytoplankton there are, the more carbon will be stored in the depths of the sea. 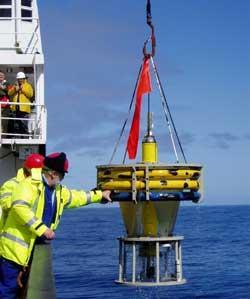 The drifting sediment trap that collects samples of sinking material while drifting at 150 m.

Artificial iron-fertilisation to promote phytoplankton growth would involve dumping huge amounts of iron in areas of the ocean deficient in this mineral but having all the other ingredients needed for a phytoplankton bloom to grow. However, the idea remains highly controversial, as the likely effectiveness of the procedure - as well as its wider environmental impact - has been questioned, because the exact relationship between iron and the amount of carbon that is removed for circulation is still unknown. In 2008 the United Nations Convention on Biological Diversity agreed to halt all but small scale coastal iron fertilisation trials over concerns about the potential environmental impact.

The Crozex project led by Raymond Pollard and Richard Saunders from the National Oceanography Centre in Southampton, UK, studied the seas around theCrozet islands in the Southern Ocean in an attempt to confirm exactly how iron levels affect carbon capture. ’Establishing quantitatively the relationship between iron and carbon is a really key thing to do,’ says Saunders.

The water around the Crozet islands is naturally supplied with iron from the volcanic islands. ’We know unequivocally that iron comes out of these land masses, enters the surrounding ocean and fertilises plant growth,’ Saunders adds.

After measuring the concentrations of total dissolved iron in the ocean, the team used a variety of techniques to measure how much carbon was exported to the ocean depths. They calculated the amount of organic carbon sinking from the surface ocean (the top 100 metres that is mixed by winds and currents) to the ocean interior using 232Th-238U ratios. ’Thorium is a naturally occurring radioactive element with a high affinity for particles, but its parent uranium has a low affinity for particles,’ explains Saunders. Thorium particles attach themselves to the carbon particles, and when they sink, change the normally stable ratio of thorium to uranium. ’Because we are dealing with a radioactive element with a defined half life, we can estimate the rate of downwards flux from the surface ocean,’ he says.

’Deeper in the ocean we use sediment traps that are analogous to rain gauges. They are funnels that collect the particulate matter and store them in small pots,’ Saunders says. One pot is then collected each month over a year long period. The team also took sediment cores to sample deeper sediments.

The team’s findings confirm that natural iron fertilisation increases the amount of carbon exported to the ocean interior by two to three fold. However, this amount was 18 times greater than those seen during a 2004 experiment where a phytoplankton bloom was induced by artificially adding iron, but 77 times smaller than that of another bloom initiated by a natural source of iron - studied by another international team led by Stephane Blain, Marseille Centre for Oceanography, France, two years ago. ’We still don’t know if the numbers were different because it was a different environment or if there was something fundamentally different,’ says Saunders.

But despite the lack of agreement, the figure is still significantly lower than some geoengineering estimates, adds Pollard, which has ’significant implications for proposals to mitigate the effects of climate change through purposeful addition of iron to the ocean’.

’This study gives us a much better idea of what iron fertilisation in the natural sense is doing,’ says Michael Behrenfeld, an expert in marine carbon cycling and climate change at Oregon State University, US. ’But why the numbers are so different remains a big question.’

But Behrenfeld is strongly opposed to the idea of artificially spiking the ocean with iron as a way to counter climate change, adding that such a process would trigger large, unpredictable changes to the ecosystem. ’There has been a large amount of discussion in the community as to whether that is a good idea. And generally speaking it is not considered to be an effect way to combat climate change - there are much better ways, with much more predictable outcomes, of dealing with CO2.’