UK researchers have observed a phenomenon called the isotope effect in a single molecule trapped within a membrane-based ’nanoreactor’. The isotope effect - where the rate of a reaction is altered depending on the presence of a given isotopic atom in the reactant - is a key tool for elucidating reaction mechanisms, and the new finding could open up powerful new ways to study chemical reactions.

Hagan Bayley’s team at the University of Oxford has previously shown how a nanoreactor can be created by assembling proteins within a lipid bilayer to form a nanoscale pore through which ions can flow, creating a measurable ionic current. Molecules can be trapped and reacted within the pore and the changing identity of molecular species within the pore is mirrored by changes in the ion current, which can be measured at sub-millisecond timescales. 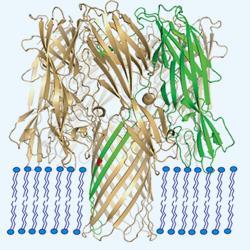 In the latest experiment, the researchers created a nanopore with a thiol group protruding into the space within the pore. A quinone molecule was then introduced, which reacts with the thiol to form first an intermediate, followed by a product. This gives two distinct ion current signals. If the experiment is repeated with a deuterium atom in the place of a key hydrogen on the quinone ring, conversion of the product occurs significantly more slowly because the reaction requires the breaking of the C-H (or C-D) bond - this is the isotope effect.

Bayley concedes that the method has limitations, but says that it provides an important proof of principle. ’This kind of single molecule chemistry is still pretty new, and we are just exploring what you can and can’t do. But it does look as though we can get information that we cannot by doing bulk reactions.’

Ian Williams, who researches reaction mechanisms at the University of Bath in the UK, notes that ’although the authors make a point of distinguishing their single molecule technique from ensemble studies, it is interesting to note that by averaging many measurements, each for reaction of a single molecule, they are doing the same as computational chemists who perform simulations to obtain "ensemble-averaged" isotope effects that may be compared meaningfully with experiment.’