Laser can detect explosive traces at a distance

Researchers at the Massachusetts Institute of Technology, US, (MIT) have developed a laser-based explosives detector that can spot 2,4,6-trinitrotoluene (TNT) at concentrations of 1ng/cm2, from 15cm away.

Terrorism has created a need for new explosive detection devices that can operate in vulnerable buildings, but so far devices sensitive enough to catch traces left on a bomb-maker’s body and belongings need to come into direct contact with the explosive. 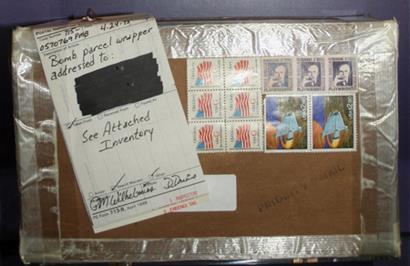 Minute explosive traces on suspicious packages could be spotted in seconds

Other laser strategies for detecting explosives suffer from problems such as weak signals or use powerful lasers that can damage eyes. The method explored by Charles Wynn and colleagues can generate a very specific signal from nitrate and nitro-bearing explosives using eye-safe laser pulses. It has detected DNT, TNT, C4, and PETN, yet until their experiment, Wynn says other laser devices had only sensed ’big globs of material’.

The detector uses photodissociation laser-induced fluorescence (PD-LIF) to break the explosive molecule into fragments - nitric oxide (NO) - and probes the NO with the same UV laser pulse. The NO from the explosive is differentiated from ordinary smog (also NO) because it has extra vibrational energy in its bond. The vibrating NO will absorb a photon from the laser pulse boosting an electron into an excited state. When it drops back to its ground state, the molecule emits the vibrational energy as light, which the detector can pick up on.

To test PD-LIF’s ability to detect explosive traces, the team ’dropcasted’ the TNT by dissolving small amounts in acetone and setting drops of the liquid onto silicon. Once dry, they imaged the residue under a microscope to map the concentration and distribution of the TNT and also used PD-LIF to see whether the TNT signal appeared. For realism, researchers also pressed a finger onto a piece of TNT and then touched two silicon wafers in succession to leave prints. PD-LIF was able to detect the explosive traces in fingerprints.

’The published nanogram per square centimetre sensitivity at short distances is indeed very impressive, as is the overall quality of the research,’ says Talya Arusi-Parpar of Soreq Nuclear Research Centre, Israel.

In addition to demonstrating that PD-LIF can detect minute concentrations of TNT, the researchers also discovered that the signal from the TNT scales with the area covered by it - not with the mass concentration.

To identify explosives from metres away, rather than centimetres, a higher-power laser and a telescope to detect the explosive’s light signature is needed. Another team at MIT is working on the laser, which is designed to scan a square metre in about 12 seconds, while a 28cm commercial telescope could suffice for distances of 10m, says Wynn.

While this wouldn’t be fast enough to scan for roadside bombs, Sara Wallin of the Swedish Defence Research Agency in Stockholm says that it could check the area around a car door handle in less than a second ’which in a checkpoint scenario would presumably be quite satisfactory’.