Scientists in the US have developed a ’laser nanoantenna’ that could significantly boost the level of detail available to tabletop microscopes.

Developed by a team led by Federico Capasso at Harvard University, Massachusetts, the compact device could resolve the chemical composition of samples, such as the interior of cells, in greater detail than ever before.

The method uses a nanoantenna to create a focused spot of infrared laser light, hundreds of times smaller than the width of a human hair. This tiny - but intense - spot can then be scanned across a sample, revealing its chemical make-up. Since different molecules absorb infrared light at different wavelengths, each compound has a tell-tale signature. This allows the infrared spot to reveal chemical information on an extremely small scale. 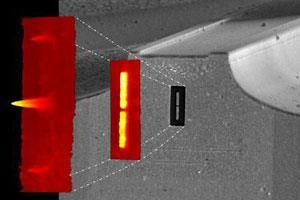 Atomic force microscope image of the antenna combined with an optical image obtained with a near field scanning optical microscope, showing the highly localized light spot in the antenna gap

The nanoantenna is made from two gold rectangles, each about 1200nm in length, separated by a gap of 100nm. Infrared light shines through this gap, producing spots of light 70 times smaller than the wavelength of the light itself.

Focusing light to a point using a lens cannot produce spots smaller than the wavelength - in this case around 7000nm. Sub-wavelength spots of light have been produced before with nanoantenna systems, but this is the first approach to combine the technologies into a single device.

To produce the infrared light, the researchers used quantum cascade (QC) lasers, which were first developed by Capasso and colleagues in 1994. The millimetre-sized QC lasers emit infrared laser light and have found applications from pollution monitoring to breath analysis. They are made by stacking nanometre-thin layers of semiconducting materials on top of each other - by varying the thickness of these layers the wavelength can be tuned to suit specific applications.

’By combining QC lasers with optical antenna nanotechnology we have created for the first time an extremely compact device,’ said Capasso. ’This will enable the realization of new ultrahigh spatial resolution microscopes for chemical imaging on a nanometric scale of a wide range of materials and biological specimens.’

Peidong Yang, at the University of California, Berkeley, also works on producing very small light sources. Yang told Chemistry World: ’This is a neat idea. If you can make light sources very small then certainly chemical or biological imaging applications seem feasible in the future.’