Lessons for carbon negative fuel production in the Amazon

Dark, nutrient rich, Amazonian soil could hold the key to reducing carbon emissions, claim researchers in the US. 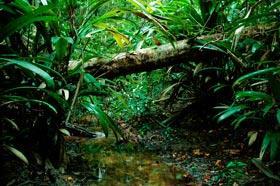 Rich black soil - terra preta - was created by humans up to 4000 years ago in infertile regions of the Amazon. The high nutrient content of terra preta is recreated today by low-temperature slow burning pyrolysis of biomass. The resulting product, black carbon, known as bio-char, reduces the need for fertilisers. It can also be used as a fuel.

Johannes Lehmann from Cornell University wants to see bio-char developed for widespread use. He says it is carbon negative, unlike all known biomass fuels, corn or rapeseed included, which are, at best, carbon neutral. ’Other biomass doesn’t create a carbon sink, it just offsets other fossil fuel energy,’ Lehmann told the American Association for the Advancement of Science. Even after taking into account transport and other carbon positive processes involved in bio-char manufacture and use, it is still carbon negative, said Lehmann.

Attempts to recreate terra preta are not as important as understanding how the soil functions, or the implications of producing it, said Be?ta Em?ke Madari from Brazil’s ministry of agriculture. ’Bio-Char production is possible, but we have to know the environmental consequences and if it is economically viable,’ she told Chemistry World.

Madari is trying to understand what makes terra preta so fertile and different from other soil. She says the organic matter in terra preta is stable because it has a core of several aromatic rings.   The soil can store nutrients thanks to reactive carboxylic groups on the surface of that core.

Bio-char production sites already exist in Brazil, and Madari agrees that bio-char is an interesting alternative either as a fuel or for agricultural use. But it must not lead to other local problems, such as deforestation, she cautioned.

Whether global carbon trading mechanisms are a sufficient incentive for potential agricultural bio-char users to compete economically with those who use bio-char as fuel remains unknown, said Cornell’s Lehmann. ’If we can plug in other environmental benefits such as reduced offsite pollution with nitrogen and phosphorous, or reduced fertiliser use, we can see immediate economic kickback that will make it more attractive than burning the bio-char either in home cooking or in a power plant,’ he said.

Lehmann is working with UK researcher John Gaunt at the Rothamsted Institute.