Light on the horizon for chemicals sector

The worldwide chemical industry appears to have stabilised and could show mild growth by the end of the year, say industry economists

Production in the worldwide chemical industry, battered and bruised by the global economic meltdown, appears to have stabilised and could even show mild annual growth by the fourth quarter of this year, according to industry economists.

Moncef Hadhri, chief economist at the European Chemical Industry Council (Cefic), told Chemistry World that he believes EU chemical industry output plunged to its lowest point in December 2008, when production was down nearly 26 per cent on December 2007.

Since December, EU chemicals production (excluding pharmaceuticals) has been dragging along posting mild growth each month at best, but remains sharply down compared to last year’s figures, Hadhri says. For example, in June 2009 (the most recent data available) EU chemicals production was down 12.4 per cent on June 2008, while first half 2009 figures were down 18.6 per cent on the first half in 2008.

However, Hadhri believes European chemicals output in Q4 2009 could outperform the extremely weak output seen in Q4 2008. ’If we continue on the same path, it is possible that the fourth quarter could show annual growth,’ he says. 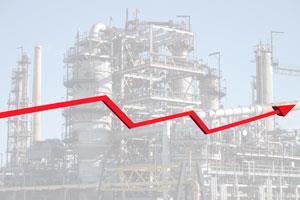 The chemicals industry is beginning to show tentative signs of recovery

The road to recovery

That is the good news. The bad news is that it is going to be a long hard climb for the chemicals industry out of a very deep hole. Even if the industry does resume annual growth rates by the end of the year, Hadhri does not see EU chemicals output rising to January 2008 levels until the second half of 2011 or first half 2012.

The polymers and base chemicals subsectors were among the hardest hit late last year he says, but will likely be the first subsectors to post positive year-on-year growth, while the consumer and specialty subsectors, which suffered milder declines, will lag behind in the recovery.

Hadhri says the chemical industries (excluding pharmaceuticals) of various EU nations are generally following similar paths, but that Germany and France seem to have been leading the recovery in recent months.

Alan Eastwood, economic advisor at the UK’s Chemical Industries Association, says the UK chemicals industry output is generally following a similar path to other European nations, and echoes the sense that the sector has hit the bottom of the trough. ’The aggregate for chemicals excluding pharmaceuticals is resolutely flat since December,’ he says. ’I don’t think we are going down any further.’

Eastwood is mildly optimistic, tentatively suggesting UK chemicals output in the current quarter could show fractional growth over Q3 2008. If not in the third quarter, he says, there is still hope for growth in the fourth.

Kevin Swift, chief economist at the American Chemistry Council, says no chemicals subsector in the US has been spared the pain of plunging output: ’It is across the board, every sector,’ he says.

Like in Europe, US chemicals output excluding pharmaceuticals also hit bottom towards the end of last year. The chemical production index, used to track chemicals production across the US, plunged in December and since then has bounced along near that bottom, Swift says. In July, preliminary data indicated some potential signs of recovery, with the index up 0.6 per cent on June 2009, but still 15.8 per cent down on July 2008.

However, with the inventories of chemicals buyers now nearly depleted, buyers are starting to place new orders, Swift says. This is triggering an ’inventory bounce’ that might be enough to lift the third quarter to mild growth compared to the second quarter, and if not then, then ’definitely by the fourth quarter,’ he says.

Swift expects chemicals output in the US to turn positive again in 2010, but the recovery will be meek, not the roaring bounce that has followed some past recessions. He predicts 2010 growth at 1.5 per cent, followed by gains of 1.8 per cent in 2011 and 2.3 per cent in 2012.

The output index hit a quarterly high in the third quarter of 2007. When might the index reach that level again? ’It is going to take some time,’ says Swift. ’After 2012.’