European scientists have developed a new technique to detect attogram quantities of iron in living cells. - providing further evidence of the role the metal plays in Parkinson’s disease.

Iron is thought to form bulky chelate complexes with the neurotransmitter dopamine in diseased cells, preventing it from being stored or transported properly. But to date this has only been confirmed in the test tube because conventional imaging techniques are not powerful enough to pick up the tiny traces of iron.

Now, a team led Richard Ortega at the University of Bordeaux, France, has used powerful X-ray radiation from a synchrotron to track iron in cells cultured from rats.

By using a highly focused beam of X-rays with a wavelength of 88nm, the team excited the iron in the cell and recorded the radiation released by the metal -detecting amounts as small as one attogram (10-18g). They then mapped dopamine in the same cell using ultraviolet fluorescence spectroscopy and superimposed the images from the two techniques.

When they compared the images they got from normal cells and cells treated to mimic the onset of Parkinson’s disease, they found iron accumulating inside the dopamine storing vesicles of the cell. 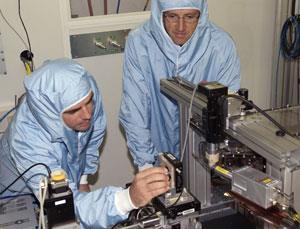 The new X-ray setup opens up many possibilities for similar research, Ortega told Chemistry World. ’This research is in an early stage [but] the work provides a new way of thinking about treatment of Parkinson’s disease.’

Olivier Hignette of the European Synchrotron Radiation Facility (ESRF), who helped develop the equipment used in the research, said stronger more energetic X-rays could allow many more metals in cells to be probed.

’We are not yet at the limit of this technology,’ he said. ’Upon improvement of the apparatus, 40 or even 30nm radiation with similar photon fluxes may be achieved.’