'Microenvironment' concept corrected for AADase, the enzyme often cited as a classic example of the theory

US researchers have uncovered a gentle biochemical irony: a famous enzyme, whose study led to some of the fundamental concepts of biological catalysis, does not in fact behave in the way that was previously thought. However, while textbooks may have to be amended, they will not need to be entirely re-written - the general hypotheses arising from work more than four decades ago on acetoacetate decarboxylase, or AADase, still hold good, even if the ideas relating to the precise workings of the enzyme itself were slightly askew.

In the 1960s one of the founding fathers of modern biochemistry, Frank H. Westheimer, carried out a series of pioneering studies on AADase to show that it catalyses the decarboxylation of acetoacetate to acetone through the interaction of a lysine residue in the enzyme’s active site with the substrate.

On the face of it, such a lysine should be precluded from participating in the reaction because it usually carries a positive charge yet would need to be neutral. However, the sequence of amino acids in the active site showed that a second lysine lay next in line - lysine-115 and lysine-116, respectively. Westheimer hypothesised that the close proximity of a similarly charged residue caused an ’electrostatic perturbation’ in its neighbour, rendering lysine-115 neutral and thus able to take part in the reaction.

This gave rise to the key concept of a ’microenvironment’ within enzymes’ active sites - that the interior of a protein could provide conditions for a reaction that would not normally occur. Such electrostatic perturbations have subsequently been demonstrated in a number of enzymes, supporting the general theory.

However, Karen Allen at Boston University and her colleagues have now for the first time solved the crystal structure of AADase and shown that electrostatic perturbation of one lysine by another cannot be happening.

’While the two lysines are next to each other in the primary sequence of the polypeptide, because of the way they are arranged in space they are as far apart as they can possibly be - too great a distance for there to be an electrostatic influence,’ Allen explains. 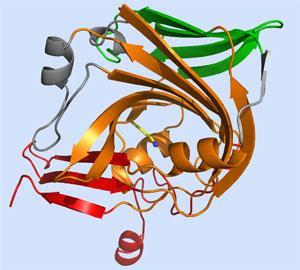 AADase depicted as a ribbon diagram coloured to show the major structural components including the central, cone-shaped seven-stranded beta-sheet (orange), the four stranded sheet (green) and the three stranded sheet and helix (red). The catalytic Lys115 (shown as ball and stick) lies at the bottom of the 26.8? deep cone

What Allen’s team discovered is that the protein is folded in a way not seen before, creating a cone or funnel at the bottom of which sits the reactive lysine - another example of a microenvironment. ’Deep within this funnel it is an extremely hydrophobic environment,’ says Allen. ’In these circumstances it would be very difficult for the lysine to retain its positive charge.’ It is this so-called desolvation effect that increases the reactivity of the lysine. ’So while Westheimer’s microenvironment hypothesis was correct, the exact explanation was not,’ says Allen.

’While this finding for me was very satisfying, it was also somewhat tragic - I really wanted to prove Westheimer correct, I wanted to see the two lysines dancing together in the active site.’

Enzymologists say that the result is interesting. David Leys at the University of Manchester in the UK says it is ’a nice study bringing crystallography together with standard enzymology, providing true mechanistic insights and explaining things which have been observed since the 1960s.’ Adrian Mulholland at the University of Bristol in the UK notes that ’the question of why the enzymes have evolved to use lysine specifically is an interesting one, and the structure will help address this.’