Magnetochemists are disputing the breakthrough discovery of a metal-organic material which its inventors claimed to be magnetic at room temperature and stable in air. The research, published in Nature in January 2007, had been hailed as a major advance - paving the way for lightweight magnets which could be dissolved and moulded into any shape at room temperature. Potential applications are as diverse as thin coatings for spintronic computing chips or lighter spacecraft parts. 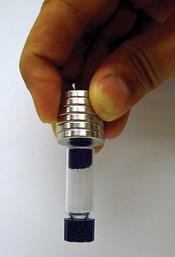 But US chemists have now challenged the findings, saying the apparent metal-organic molecular magnets are nothing more than small lumps of nickel. If correct, that would add one more refuted discovery to a field already plagued by false claims.

Chemists have been searching over two decades for magnets made of organic molecules. They would be far easier to process than inorganic magnets, such as iron, which can only be melted at high temperatures. Finding them isn’t easy: many hybrid organic ligand/metal ion molecular materials are magnetic at -200?C, but lose their magnetism as temperatures rise. In 1991, a landmark vanadium complex with organic ligands met the requirements but decomposed in air, and later variations on this theme are also air-sensitive.1

So Robin Hicks, of the University of Victoria, Canada, was excited to discover a black magnetic powder made by adding two parts nickel ions to one part organic ligand and exposing the lot to air.2

Hicks couldn’t detect any contaminants (such as nickel metal) via x-ray photoelectron spectroscopy (XPS), so he was sure organic ligands were crucial to the magnetic properties of the powder. But working out a molecular structure has proved difficult because the material does not form crystals.

’Since we don’t know what it is we’ve made, it’s not surprising that people would have some issues,’ Hicks admitted. Among the sceptics is Joel Miller, at the University of Utah, US, who was part of the team that reported the 1991 vanadium success. His recent paper points out that dissolving a nickel complex in dichloromethane - the first step of Hicks’ recipe - creates a magnetic material without any organic species needed.3

"Since we don’t know what it is we’ve made, it’s not surprising that people would have some issues" - Robin Hicks

Miller thinks that Hicks has simply created colloids of nickel - not an organic molecular magnet at all. He suggests that the XPS technique may only have probed an organic surface coating, failing to detect nickel lumps below. However, Hicks remains confident that his technique probed the material’s bulk structure, and suggests that though nickel particles may have been created in the reaction’s first stage, exposing them and the organic ligand to air is key to creating the final molecular magnet.

Magnetochemist Arthur Epstein, of Ohio State University, US, said Miller’s criticism was ’compelling’, and ’raised a lot of questions’. But other chemists aren’t sure that anyone had sorted out the facts. ’These materials - including the vanadium compounds - are doomed to be the subject of great controversy about their chemical composition and purity. There is no doubt that the reactions lead to magnetic phases, but if they can’t be fully characterised, then it is not so much chemistry as a form of alchemy,’ sympathised Kim Dunbar, of Texas A&M University, US. Dunbar herself has experienced the difficulty of working out the structures of related magnetic phases.

No-one criticises magnetochemists for rushing out exciting discoveries, but ’the challenge is to ferret out the bad results,’ Dunbar said. A famous instance was the 2001 report of room temperature magnetic carbon buckyballs (C60), from a team led by Tatiana Makarova, a Russian physicist working at Sweden’s Umea University. The possibility that her results were due to contamination, Makarova told Discover magazine in 2002, was ’approximately equal to the possibility that a monkey at a computer will type a Shakespearean sonnet’. Yet, after researchers discovered samples of iron metal in the samples, the report was retracted in March 2006, though Makarova declined to sign the retraction.4

Magnetochemists are still optimistic that despite false alarms, some kind of organic air-stable room temperature magnet will be found - and its structure understood. Research hasn’t slowed: Miller is about to report another vanadium complex which is magnetic near room temperature, though unstable in air.5 ’The holy grail is still to make a stable, well-characterised, room temperature molecular magnet. It would be something to be proud of,’ said Hicks.