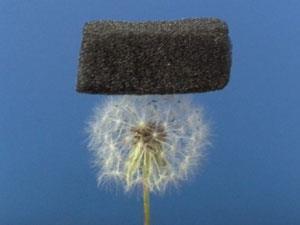 The ultralight foam is magnetic too

Chinese scientists have created magnetic foams which can absorb up to 100 times their weight in oil. Simple and relatively cheap to produce, they could be used to clear oil slicks, as well as in a variety of experimental applications.

The foams, created by Ning Chen and Qinmin Pan of the Harbin Institue of Technology, are made using polyurethane. Each piece of foam is made up of thousands of interconnected tubes, akin to a stack of nano-scale pan pipes, and oil can be soaked up and stored in these tubes. Although many materials have been touted for oil-water separation, few are so cheap and simple to make. This, coupled with the fact that they can be guided to oil spills using magnets, makes them an exciting development in oil spill clean-up, as well as for laboratory separations.

While oil spills on the scale of Deepwater Horizon are extremely rare, smaller oil spills like the recent Rayong spill in the Gulf of Thailand are still common. Currently, oil spills are dealt with using a variety of methods, each of which has drawbacks. The most common method for dealing with a large spill is to try to skim the oil slick off the water mechanically. This approach has severe limitations as the separation of oil and water is poor, according to Bob Lochhead, a professor of polymer science at the University of Southern Mississippi, US. The second method is to use chemical dispersants to aid the natural dissipation of the oil, but this can cause added damage to marine and land ecosystems.

Scientists have been searching for years for a scaleable material to remove oil, and Pan was effusive about the benefits her foams could have. ‘These superhydrophobic magnetic foams display high oil-absorption capacity and [these] important properties make [them] a promising material capable of quickly cleaning large-area oil spills.

Previous ultralight foams and gels had a random structure, unlike the hierarchical set of interconnected tubes the new material possesses. Furthermore, by changing the reaction conditions the size of the tubes can be varied, changing the properties of the foam. To make the foams magnetic, they were dipped in solutions of iron, copper and nickel nitrate – the metal ions lock in to the structure by binding to carboxylic acid groups contained within it. The polyurethane capillaries were also given a superhydrophobic coating – via treatment with methyltrichlorosilane – to give the material excellent oil-water separation properties.

Pan and her team tested the magnetic foams’ absorbency against a variety of oils including bean oil, hexane and, perhaps most importantly, crude oil. The foams absorbed over 90% of the crude oil by volume, and up to 100 times their own weight. They are also incredibly light, weighing less than 5mg/cm3. 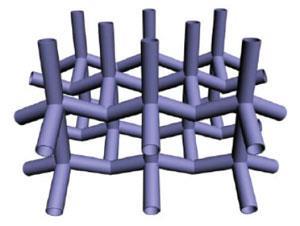 Other uses for the foams are less attention grabbing, but still important. Lochhead says they could make many chemical processes more efficient. ‘There’s a real need for oil-water separation, from bioarrays all the way up to large oil spills, and all the chemical processes in between.’ Catalysis is another area where their huge surface area and tuneable structure could come in handy.

Peter Budd, a polymer chemistry expert at the University of Manchester, UK, was impressed that they had tested with crude oil, something other similar materials haven’t been through, but said he was unsure as to whether the process would succeed commercially. ‘The big question is could you really scale it up economically?’