Microbial communities helped to sink Deepwater Horizon oil spill, and might one day be an alternative to toxic dispersants 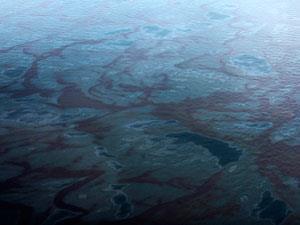 In the future bacteria could be used for oil clean-up

After the Deepwater Horizon disaster at Macondo prospect spilled 4.1 million barrels of oil into the Gulf of Mexico, bacterial communities made a significant and little noticed contribution to the clean-up. These bacteria helped to take much of the oil to the bottom of the ocean as ‘marine snow’. This knowledge could be used to develop new ways to tackle oil spills using these bacteria as an alternative to toxic dispersants.

Samantha Joye, a marine scientist at the University of Georgia, US, has been looking at sediment deposition after the disaster. Joye’s team confirmed that this sediment layer was new by examining thorium-234 isotopes in it. Thorium-234 is a naturally occurring uranium series radionuclide that has a half-life of only 24 days. This means that it can be used as a marker to establish how old the sediment is. They also used the microbial communities in the sediment as a biomarker to establish where this sediment had come from. What they discovered was that the freshly laid sediment contained bacteria you would usually expect to find on surface rather than on the sea bed.

In fact, the team found that the bacterial communities on the surface of the ocean in the Gulf of Mexico can produce a very sticky glue. This sticks to everything it comes into contact with: foraminifera, phytoplankton, algae and oil. After the Deepwater Horizon disaster, these bacteria formed ‘slime stringers’, a bio-emulsion of oil and other material, that sank down to the sea bed.

As for other approaches used after the Deepwater Horizon disaster, Joye says that she thinks it might have been better if dispersants weren’t used at all, and instead the oil was left to disperse naturally. ‘Maybe [dispersants] made things like benzene partition more into the plume but there were no controlled experiments done, so I don’t think you can say dispersants were a good thing, especially when you look at all the toxicological data that is beginning to show all sorts of problems in a whole variety of different animals,’ she says.

A body of research is now being put together on the effects of Corexit, the dispersant used in the Gulf of Mexico. Robert Griffit, from the department of coastal sciences, University of Southern Mississippi, US, says that the dispersant has a severe effect on egg production and hatching success of the sheepshead minnow, which lives in saltmarsh estuaries along the gulf coast. Research has shown that other species have also been affected by the dispersant.

Dispersants have come to be seen as a politically acceptable solution , however, the oil is still there, it’s just no longer on the surface. ‘I consider dispersants very, very dangerous and it’s a little scary because if you follow the argument that’s been going on since Macondo then dispersants are seen as the panacea, the saviour of the oil spill,’ Joye says. ‘Now I think there’s a push to make dispersants the first line of defence, as opposed to physically removing the oil and that I think is really, really dangerous.’

Joye says that she is now looking at which bacteria come together to create the slime stringers seen in the Gulf of Mexico and is hopeful that it might be possible one day to use them to disperse oil spills.