If you want to find agreement among experts about the best solar cell technology, forget it. There are nearly as many opinions as experts. But most do agree on one key point: that the photovoltaic industry is nearing a breakthrough point, beyond which production capacity will soar, offering consumers a wide variety of options at much lower prices.

Travis Bradford, president of the Prometheus Institute for Sustainable Development in Cambridge, Massachusetts, US, puts it this way: ’There is going to be a whole lot of money to be made all up and down the supply chain.’

For decades, the photovoltaic market has been dominated by solar cells made with wafers of crystalline silicon. These cells, initially developed in the 1950s and known as first generation cells, can easily last for 25 years. But they are expensive, and it can take buyers around 20 years to recoup their initial investment. 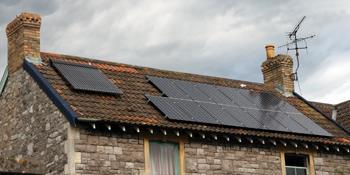 Bradford, author of Solar Revolution: The Economic Transformation of the Global Energy Industry, says that the second generation of solar cells that were developed in the 1970s, generally known as ’thin cells’, are almost ready to compete with the conventional silicon wafer technology. These thin cells use films of semiconductors such as cadmium telluride (CdTe) and copper indium selenides (CIS), rather than sliced wafers of silicon, making them cheaper to manufacture. As yet, they are generally not as durable and efficient, but they are also cheaper: eventually ’one of these thin film companies will come up with a breakthrough technology,’ Bradford says.

Eventually? Michael Gr?tzel begs to differ. Gr?tzel, director of the Laboratory of Photonics and Interfaces at the Polytechnic School of Lausanne, Switzerland, is the father of the dye-sensitised solar cell (DSC), also known as Gr?tzel cells. He produced the first such cell in 1991, and now, with an additional 15 years of refinement, ’it has reached the point we can go on the market,’ he says.

DSCs rely on a light-harvesting mechanism that is more akin to photosynthesis than conventional silicon cells. Using a single semiconductor to absorb light and transport current often leads to a compromise in performance of one of these tasks, and the materials must be of extremely high purity. 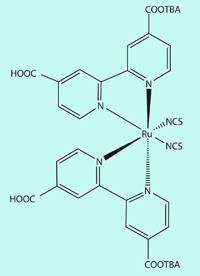 But DSCs use two different chemical compounds to harvest light and distribute the photoelectrons. A metal-organic ruthenium dye is used to absorb light, while its excited electrons are separated into a current by semiconducting titanium dioxide. These low-cost materials can be assembled into a wide variety of sizes, shapes and colors using a relatively simple process similar to inkjet printing, and the dye can be easily ’tuned’ to optimise its performance (see Chemistry World,  October 2006, p14).

The cell’s current efficiency rating - the percentage of light energy hitting the cell that is converted into electricity - is about 11 per cent. That’s still about half that of conventional silicon photovoltaics, Gr?tzel says, but he expects the cell’s efficiency to rise to 15 per cent by 2010. Other improvements are being sought by replacing the cell’s conventional polymer gel electrolyte with ionic liquids.

The Polytechnic School of Lausanne, which owns patents for the cell, has sold licensing rights to about ten companies worldwide, he says. Those include Konarka Technologies, headquartered in Massachusetts, US, and G24 Innovations, whose dye-sensitised solar cell manufacturing plant in Cardiff, UK, started production in January 2007. It hopes that by the end of 2008 its annual production of cells will collectively generate 200 MW of electrical power.

If this is realised, it will begin to present a serious challenge to conventional silicon photovoltaics, which account for nearly 90 per cent of total global sales. ’For a long time our cells were considered as a curiosity by the silicon people,’ says Gr?tzel. ’But now the cells are acknowledged as a credible option for future large scale applications.’

His technology will also be competing with the latest thin film alternatives. In October 2006, W?rth Solar opened its new production plant for CIS cells in Schw?bisch Hall, Germany. They claim this is the world’s first large scale production facility for CIS cells, and expect to make about 200,000 a year, equivalent to a capacity of 14.8 MW. Global Solar Energy, of Tucson, Arizona, US, manufactures flexible cells using a gallium-containing version of CIS, known as CIGS, on a smaller scale for specialist (often portable) applications. Meanwhile, Arizona-based First Solar currently leads the world in thin film manufacturing. Their Frankfurt, Germany, plant is expected to produce 75 MW-worth of CdTe cells this year. 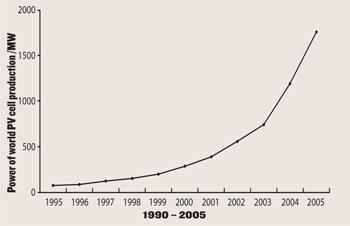 ’CIS and CdTe are well advanced, but neither has the advantages of DSC in shade and poor light,’ says Gavin Tulloch, an Australian scientist and hi-tech businessman. He is an unabashed supporter of dye cell technology, and is affiliated with three dye cell companies: Sustainable Technologies International, Greatcell Solar, and Dyesol Ltd. 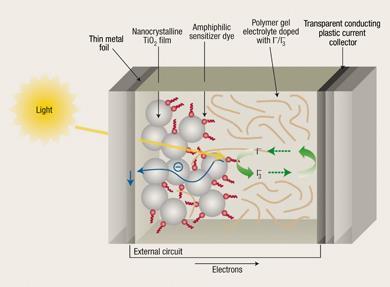 Arnulf J?ger-Waldau, renewable energy expert for the European Union’s Institute for environment and sustainability in Ispra, Italy, agrees that dye cell technology is particularly well suited for the diffuse light that falls in higher latitudes. However, he says the life of the current generation of dye cells is only a fraction of conventional silicon photovoltaics, which generally last at least 25 years. This will make it difficult in the near-term to market dye cells for building integration.

’There is no scientific reason why the cells should not last for 20 years and more,’ counters Gr?tzel. ’The present embodiment of the DSC is intrinsically stable,’ he says, adding that first generation silicon cells degenerate five per cent during the first and one per cent for each subsequent year.

Japanese firms dominate production of first generation cells, with Sharp leading the field with about a quarter of global production (equivalent to an output of 428 MW) in 2005. But DSC manufacturers are largely funded by venture capital, and Tulloch says the field is still wide open for entrepreneurs. He believes that today’s start-up companies stand a good chance of being gobbled up by big players like Sharp and GE in coming years, just as wireless and other innovative telecommunications firms were taken over in the 1980s and 1990s by the old telecom giants.

However, another business sector is playing an increasingly important part: ’Watch the chemical companies,’ says Tulloch. ’All thin film technologies rely on sputter targets, chemical vapour deposition or alkoxides,’ and companies such as BASF, Merck, DuPont, Degussa, and Johnson Matthey have all been actively looking for a position in the market. They may play an even bigger role in cells that use organic semiconductors, currently still a long way behind the rest of the field but showing promise in the lab. Still, commercialisation may take a while: ’forget organics/polymers till after 2020,’ says Tulloch.

J?ger-Waldau says that with the development of DSC and other thin film technologies, some experts forecast that conventional silicon photovoltaics’ share of the market will drop to 50-60 per cent by 2020. ’I think we are on a good track to reach it,’ he says.