US scientists have created a model of the ring-shaped networks of neurons in the brain, which could help researchers to understand small changes within diseased brain cells.

Henry Zeringue, and colleagues at the University of Pittsburgh, developed the model to enable the study of brain circuitry in an in vitro system instead of using brain slices.

In the brain, neuronal networks make up the cortex, which is responsible for holding traces of memory for short time periods. The cortex does this using persistent activity in the network, which can last from milliseconds to seconds. In neurological diseases, such as Alzheimer’s disease, subtle changes in this activity take years, or even decades, to become clinically detectable. Most studies only explore the electrical properties of a single neuron or the connection between two neurons. Until now, there hasn’t been a good model to study network activity in vitro. 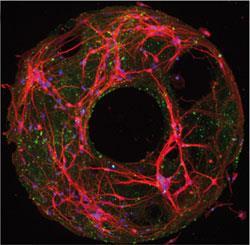 ’We have decades of knowledge on molecular mechanisms underlying synaptic control [synapses allow neurons to pass an electrical or chemical signal to another cell], along with knowledge from brain imaging. What is missing is an understanding of the network-level control,’ explains Zeringue.

Zeringue’s team stamped proteins onto glass substrates in a ring shape. Rat neurons were grown on the proteins, making a network of 40-60 neurons. To test the neurons’ ability to transmit a signal around the ring, the team used an electrical field to stimulate one of the neurons and followed the signal’s progress. To do this, they injected a fluorescent dye into the system, which responds when transmitter molecules are released. They captured the signal’s progress with a fluorescence detection camera and found that the signal continued around the ring for several seconds before a gradual decay.

’[This work] is an excellent example of using simplified circuits to understand processes in the brain,’ says Elisha Moses, an expert in the physics of complex systems at the Weizmann Institute of Science, Israel.

Zeringue and his team are considering  using their platform to characterise network-level changes based on small experimental perturbations, like changes in network geometry or expression of mutant proteins in 10 per cent of the neurons. ’Deciphering the relationship between the connectivity of the neurons and the activity in the ring culture will be challenging and unravelling the connections between the neurons may still prove to be a daunting task,’ he concludes.