A new study provides evidence for the existence of naturally occurring electric circuits orchestrated by marine bacteria. The researchers suggest that the circuits connect organisms in distinct populations, allowing a division of labour in bacterial metabolism.

Led by Lars Peter Nielsen at Aarhus University in Denmark, the team discovered electric currents in beakers of ’stinky’ marine mud, containing hydrogen sulfide, left over from other experiments. They knew that the mud was anoxic - only the very surface contained oxygen - but noticed that the hydrogen sulfide seemed to be disappearing from the upper layers, as if it was reacting with oxygen.

’This was just a mystery to us - we didn’t have any explanation,’ says Nielsen. ’After some thought, the idea came up that you could have wires in the mud. All you would need is a wire to transmit electrons from the hydrogen sulfide to the oxygen, and then they could react without being anywhere near each other.’

The wires, according to Nielsen, are bacterial structures called nanowires, which in natural marine systems would carry electric currents between populations of bacteria separated by over a centimetre. They conduct electrons produced via oxidation of hydrogen sulfide and organic matter - food sources for bacteria - in deeper sediments and transfer them to the surface. Here, aerobic bacteria use them to reduce oxygen in respiration. As the team show by monitoring the chemical components of the layers, the consequences of removing or adding oxygen are so rapid that the only explanation would seem to be a direct connection. 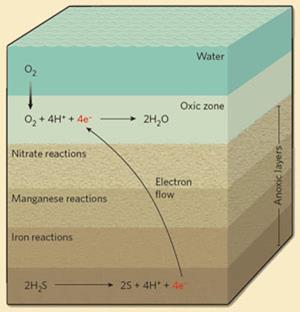 Joanna Dixon, a microbial ecologist at Plymouth Marine Laboratory in the UK, says the research represents an ’exciting breakthrough concept’. But there is much work still to be done. ’What remains more uncertain is the range in distance over which these bacterially mediated electrical circuits can or do exist, how widespread they actually are in nature and what species of bacteria are involved,’ says Dixon.

Nielsen thinks the circuits could be very widespread. And although only certain groups of bacteria are known to make nanowires, he says, many could accept or donate electrons to wires made by others. However, he admits the wires are only a theory at the moment. ’We have no direct observations of what kind of wires are in there,’ he says. ’We can just see from the processes that there must be electric currents. But if we accept the studies on bacterial nanowires, then the processes that they describe could be the explanation for our system as well.’