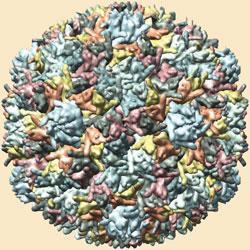 Doctors may one day diagnose viral diseases with mass spectrometers, according to a US chemist who has measured the mass spectrum of large viral protein shells and blood-clotting glycoproteins with unprecedented quality.

Mark Bier, of Carnegie Mellon University, Pittsburgh, US, explained to the meeting of the American Chemical Society in Boston that his team used a MALDI-TOF cryodetector to analyse the capsid head of the Hong Kong 97 virus, weighing 13 MDa, to within one percent mass accuracy. Higher masses and intact viruses were certainly within reach, Bier said.

’This is a new frontier in mass spectrometry research,’ said Bier. As he explained, mass spectrometers usually analyse protein composition by identifying their digested fragments - but this process takes too long for an instant clinical diagnosis. Yet soft ionisation techniques such as MALDI or electrospray mass spectrometry can produce a spectrum - identifying molecules in just a few minutes. If larger molecules could be fingerprinted accurately enough by being fragmented inside a spectrometer, doctors could hope to use mass spectrometry to diagnose a viral infection or a blood disease.

Instant spectrometry on enormous molecules is not new. In 2001, a team led by Gary Siuzdak at the Scripps Centre for Mass Spectrometry, La Jolla, California, used electrospray ionisation mass spectrometry to measure the tobacco mosaic virus, at 40 MDa.1 But those measurements were less sensitive, confirming the mass to within only 15 percent.

Instrument improvement was the key to Bier’s success: his ultra-sensitive cryodetector works at 0.3K, picking up the massive slow-moving biological particles which normal detectors struggle to measure.

Although Siuzdak cautioned that disease diagnosis was a long way off, as viral signals in biological samples could be swamped amongst thousands of other smaller proteins, he agreed that mass spectrometry had enormous clinical potential.

Bier also explained that he was analysing the composition of human plasma von Willebrand factor, a glycoprotein which is required for blood clotting. In von Willebrand’s disease, the glycoproteins join up into too many, or too few, multimers, causing faulty clotting. Bier hopes that mass spectrometry may find new multimeric combinations, aiding study of the disease.