Membrane sacs made in minutes

Strong, flexible, centimetre-sized membrane sacs that could be used to hold cells for study have been developed by chemists in the US.

When the solutions are brought into contact the components instantly react together at the interface, forming a solid polymer membrane. Critically, this membrane acts as a diffusion barrier which keeps the two solutions separate - preventing them from mixing chaotically and turning into a gel.

The researchers, led by Samuel Stupp at Northwestern University, Illinois, used this barrier to their advantage by placing the denser solution of large polymers on top of the lighter solution. This causes the heavier fluid to gradually sink, stretching the membrane into a bubble-shaped sac. 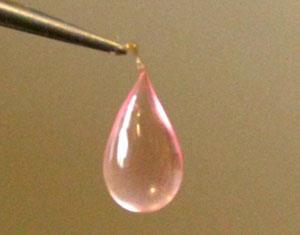 Although the membrane prevents the two components from diffusing and mixing, it is still permeable to small molecules and proteins - allowing drugs to diffuse through to cells held inside the sacs. Stem cells placed inside the sacs survived for up to four weeks, the team found.

’By controlling the concentration of the solutions and incubation time we are able to tailor the thickness and density of the membrane,’ explains Ramille Capito, the lead author on the paper. ’This is important if you want to deliver specific growth factors or proteins through it for example.’

The membranes can be dried out or created in a variety of shapes and sizes by controlling how and where the liquids meet. These containers remain flexible and robust, properties that come from the highly organised nanostructure that is formed between the two components.

The membranes can also be repaired easily if, for example, they are pierced with a needle or cut open with a scalpel. Even after being dried out, an additional injection of solution into the sac can be used to repair holes in the outer membrane.

Making membranes that are not prone to damage has so far been difficult, says Graeme Pearce, principal consultant for Membrane Consultancy Associates. ’This work is a new approach to making ultra-thin defect-free membrane films and would potentially be very useful,’ he adds.