A metal-carbon bond can activate methane to produce useful hydrocarbons

US scientists have demonstrated for the first time that a metal-carbon multiple bond complex can activate methane. The work could open the way for efficiently converting methane into useful hydrocarbons including ethylene, one of the fundamental building blocks of the chemical industry.

Methane is the principal component of natural gas and a major contributor to global warming. It is therefore desirable to find cleaner and cheaper ways of using it as a resource by converting it into more useful chemicals. However, such reactions pose significant challenges because of methane’s low reactivity and strong tetrahedral C-H bonds, which are not readily accessible for chemical attack and activation. 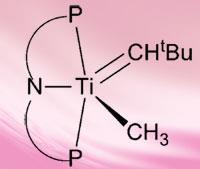 While there are known reagents that activate methane for conversion, they are few in number, produce low yields and work under extreme conditions that require high temperatures or use expensive metals. However, recent theoretical and kinetic studies have suggested that methane activation is possible with metal-carbon multiple bonds acting as reactive intermediates.

Daniel Mindiola at Indiana University, Bloomington, and colleagues have experimentally shown this for the first time by demonstrating a possible route that utilises a transient titanium alkylidyne complex (titanium-carbon triple bond) to activate the C-H bond of methane under mild conditions (25-30 degrees Celsius).

’Our system allows for a clear understanding of the steps involved in the activation of methane, but better yet, we discovered serendipitously that there is exchange, meaning methane could be being further activated to a methylidene, or that a methane adduct is exceedingly stable,’ says Mindiola. He suggests that this could allow one to ultimately use methane as a feedstock for C-C bond formation, important for the production of chemicals including pharmaceuticals and plastics.

’What’s particularly fascinating about these results is that methane addition yields an alkylidene complex,’ says Duncan Wass, a homogeneous catalysis expert at the University of Bristol, UK. ’Such species have previously been implicated in heterogeneous catalysis with methane and are well-known as powerful catalysts in C-C bond forming reactions, so it opens lots of possibilities.’

’The greatest application would be to dehydrogenate methane to methylidene and ultimately couple the two to form ethylene, the building block of the polymer industry,’ says Mindiola. ’This would save billions of dollars because it would eliminate the need to do steam cracking, a radical process that converts ethane to ethylene under energy intensive conditions.’

However, Wass heeds some caution. ’We should be under no illusions that there are still formidable obstacles to turn this into a real catalytic process,’ he says. ’But it is inspiring to have a new reaction in our armoury.’