Researchers from Spain and Germany have designed the first microfluidic device with an integrated micro fuel cell that is capable of both powering the device and pumping the analyte around the device. 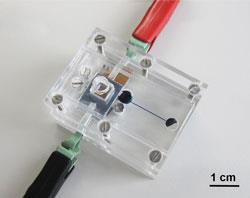 The first microfluidic device with an integrated micro fuel cell

Microfluidic devices have been hailed as the technology that will revolutionise areas such as diagnostics in medicine, food safety, drug development and genetic sequencing since their conception in the late 1980s. However, a limiting factor in translating neat microfluidic ideas to practical, portable devices has been integrating all the necessary device components. The microfluidic chip may be small and perfectly formed, but the power source, pumps and control electronics for sample analysis are often external, bulky components - existing in the macroscale rather than the microscale.

Now, a team led by Neus Sabat? at the Institute of Microelectronics of Barcelona has integrated a micro direct methanol fuel cell into a microfluidic platform, which is capable of producing up to 4mW, sufficient to power the device. The carbon dioxide produced as a by-product of the fuel cell reaction is used to push liquids through the microchannels, removing the need for an external pump. The team has shown that by controlling the fuel cell operating conditions, they can control the flow rate of the liquid, which bears an almost linear relationship to the current generated in the device.

Jonathan Cooper, an expert in lab-on-a-chip technologies from the University of Glasgow, UK, comments: ’A real strength of this work is the excellent job the researchers have done in integrating and packaging the device to show a working prototype. The flow rates are high enough for devices to function for several minutes and the device offers the prospect of enabling autonomous functionality on chip.’

The next step for Sabat? is to show that the device can truly function independently. ’We are trying to prove that we can indeed perform measurements on analytes by integrating a low power electronic chip module and amperometric sensors,’ she says.  Her team is also working on higher degrees of device integration by fabricating them from just one type of polymer and experimenting with different fuels such as glucose.