Mighty micelles that make themselves

Ticking all the right boxes: polycarbonate polymers that are antibiotic, biodegradable - and that self assemble into bacteria busting micelles

Scientists in the US and Singapore have made self assembling micelles of cationic polymers that kill bacteria but are biodegradable - raising further hope of a nanotechnology solution to the problem of antibiotic resistance.

Conventional antibiotics typically kill by penetrating the cell wall and disrupting vital cellular processes inside. But bacterial resistance to such antibiotics is growing because bacteria that survive treatment go on to proliferate, thereby spreading their genetic advantage.

Some cationic peptides can kill bacteria by disrupting the cell wall of the bacteria instead, and resistance in this case is less likely to arise. But these peptides are often toxic to the host and insufficiently stable in the body. Polymers that mimic these drugs are often less toxic and more stable, but do not degrade naturally, so build-up in the body or the environment could become a problem if they were used. 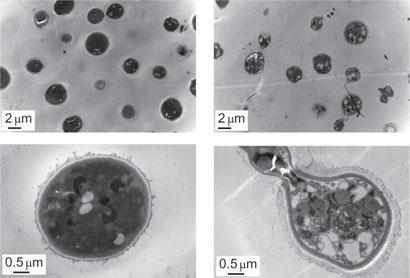 A group of scientists led by Yi-Yan Yang at the Institute of Bioengineering and Nanotechnology in Singapore and James Hedrick at IBM in California, USA, has developed a cationic polymer that mimics the action of peptides on bacteria and is biodegradable.1 Yang’s group is fond of a ring-opening synthesis it recently developed.2 ’With this approach, we can use organocatalysts, which are easy to remove, so they don’t contaminate the product,’ she says. ’We also have good control over molecular weight and structure, which are important for the pharmacokinetics of the product.’

The new polymer is based on a well known biocompatible polycarbonate, and it can self-assemble in solution to form nanoparticles called micelles. The micelles interact with the cell walls to kill the bacteria without harming the patient, and the nanoparticle structure means a lower dose is needed. The researchers tested the micelles in mice, and found they were as effective as conventional antibiotics at killing bacteria, including the challenging methicillin-resistant Staphylococcus aureus (MRSA), and crucially showed less evidence of resistance.

Aline Miller, an expert in self-assembling materials at the University of Manchester, UK, says ’it is a simple, clever synthesis. They use self-assembly into simple micelles and show that you don’t need complex morphology to get the effect’.

The project is part of the IBM ’Smarter Planet’ initiative, and Hedrick believes ’there is tremendous promise for improving health by applying nanotechnology to create and control materials that have molecular level medicinal effects’. The antimicrobial biodegradable polymers could be used in anything from mouthwash to wound healing, he says. The group is already working on formulations for application to the skin for example.