The team combined the low thermal conductivity of the chip material (polydimethylsiloxane) with a qiandu shape (right triangular prism) to create a height dependent temperature gradient using a single heater. Placing the heater at the base of the qiandu creates a natural temperature gradient on the slanted face. The bottom of the slanted plane is closer the heater and therefore hotter than the top. 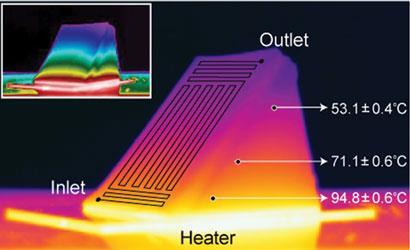 Liquid flowing through micro-channels on the face of the qiandu changes temperature as it moves from the bottom to the top and back to the bottom again, creating a natural temperature cycle. Lee and the team showed that using a single continuous micro-channel that repeatedly cycles up and down the face of the qiandu can create the different temperatures required for the denaturation, annealing and extension steps in the PCR.

Lee explains that a practical micro total analysis system for disease analysis or diagnosis requires more than just the micro-channels and heaters. To make it easily transportable will require ’miniaturising the accessories, such as the pump and detection systems’, however, the team hopes that these components will be miniaturised soon.

Tom Brown, an expert in nucleic acid chemistry at the University of Southampton, UK, says that a portable PCR device could find widespread use. ’Portable PCR devices could be used in important applications in human and veterinary medicine for point of care analysis, and in forensic science for identification,’ he says.