Canadian researchers have discovered a new class of molecular magnets which work above room temperature. But why the magnets work, and what their structures are, remains a perplexing mystery.

The visually disappointing - but magnetically exciting - black powder is made by adding two parts nickel ions to one part organic ligand. By varying the ligands, said research leader Robin Hicks, of the University of Victoria, the researchers can create a whole family of easily processable magnetic materials. They could be used as magnetic films, or in new forms of computer memory storage.

As Hicks explained, scientists have been searching over two decades for magnetic materials made of organic molecules, perhaps in combination with metal ions.  These would have many advantages over traditional inorganic metal or metal oxide magnets, like a chunk of iron. 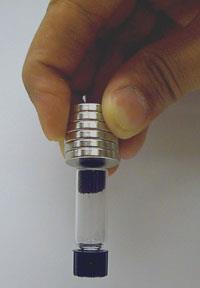 Molecular magnets might be easier to process and mould into shapes, which would avoid the high temperature routes needed to melt iron. More importantly, though, chemists hope to fine-tune molecular magnets’ behaviour to their whim, by changing the structure of the molecules involved.

Sadly, there have been few practical success stories so far. The big stumbling block, said Hicks, is in getting molecular materials to behave as magnets at room temperature. Many work at -200?C, but individual molecular spins communicate too weakly to make a whole material magnetic as temperatures rise.

In 1991, a vanadium complex with organic ligands met the requirements, though it was very sensitive to air. Shortly after that, in 1995, the ’Prussian Blue’ (ferric hexacyanoferrate) family of transition metals were also shown to produce room-temperature magnets via chemical tuning. ’For the past decade, there have only been minor variations on these known themes,’ commented Chris Landee, of Clark University, Massachusetts, US.

The new breakthrough, Landee told Chemistry World, ’represents one of the major advances in molecular-based magnetism in a decade’. But, Hicks admitted, his team doesn’t know why the magnets work, or exactly what the molecular structures are. ’That’s the $64 000 question - or worth rather more than that,’ he said. ’The publication of this article will generate a great deal of activity in laboratories around the world as chemists explore the new territory as well as rethink their old assumptions,’ said Landee.