Multicomponent reactions step up a gear

Romano Orru, Eelco Ruijter and their group from VU University, Amsterdam, have recently developed two new multicomponent reactions (MCRs) based around the highly selective reactivity of alpha-acidic isocyanides. ’We discovered that [these new reactions] are quite selective in their reactivity,’ says Ruijter, ’but they are also compatible with the presence of lots of different functional groups in the starting materials, and work in just about any solvent. Once we knew that, we wondered whether we could combine them with other multicomponent reactions, to unify them.’

The team started off quite simply, combining each of their two new MCRs with other, well-established MCRs such as those developed by Passerini in the 1920s and Ugi in the 1960s. They also found that they could combine their reactions with more recently reported MCRs. 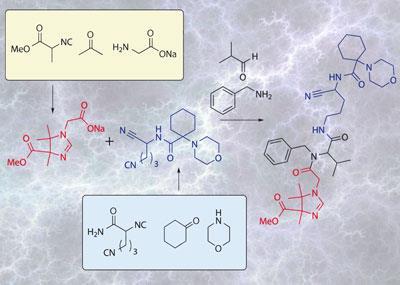 The first reaction (red) forms an imidazoline, then the components for the second (blue) MCR are added to form an N-(cyanomethyl)-amide. The two halves are then united by benzylamine and isobutyraldehyde in an Ugi reaction

’We had developed a range of five- and six- component reactions, and then we realised that there was really only a small hurdle left to combine three multicomponent reactions in one flask,’ Ruijter explains. If they could carry out a second reaction in the same vessel that was independent of the first reaction but ended up with the right functionality, then the two products could be combined using a third MCR.

The final obstacle was to make sure that each reaction was fully complete before the reactants of the next one were added, says Ruijter, since many of the components at each stage have similar functionality. He adds that the union is only possible because both of the first two reactions go to completion even with exactly 1:1:1 ratios of reactants, so there are no residual components to interfere with the later steps. Most of the united reactions are extremely efficient, with overall yields of between 50 and 80 per cent, corresponding to around 90 per cent per step if the same reactions were done step-wise.

’The union of MCRs is an idea many researchers have considered,’ says Bruce Ganem from Cornell University in Ithaca, US. ’This group deserve a lot of credit for "threading the needle" - finding just the right reactivity combination to achieve really useful results. It’s an enterprising approach that maximises the utility of known MCRs.’

Eelco hopes that the ability of these unified MCRs to generate complex molecules relatively quickly will make them useful in medicinal chemistry. ’Since it’s only one step you can rapidly make a whole series of related compounds, which might be rather hard to make by other methods,’ he adds. ’The process is typically quite simple - most of these reactions can be done by undergraduate students [in our lab].’ Ganem agrees that the molecules do look quite drug-like, ’but the real answer as to their utility will be whether chemists incorporate these united MCRs into their drug development programs’ he adds.

One obstacle to the utility of these reactions might be the lack of stereocontrol - the product of the eight-component reaction is a mixture of four stereoisomers (in equal parts), which are difficult to separate. ’Stereoselectivity has been a major issue in multicomponent reactions,’ says Eelco, ’lots of groups are working on catalytic asymmetric versions, but it’s still very challenging.’ Ganem agrees, but is also optimistic: ’some significant inroads have been made recently,’ he says. ’There’s a lot of room for creative approaches.’