Mummified child given alcohol and cocaine before sacrifice 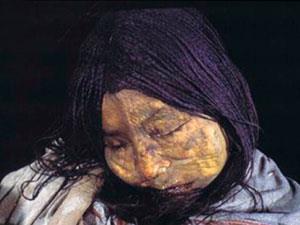 Scientists have analysed the hair of a 500 year old mummy, finding a spike in alcohol and cocaine just before she was killed in an Incan ritual. This indicates that the 13-year-old girl, known as the ‘Llullaillaco Maiden’, was given alcohol and coca leaves to sedate her before her death.

The team, led by Timothy Taylor, at the University of Bradford, UK, took hair samples from the scalp of the child, who was found in 1999, preserved near the icy summit of the Llullaillaco volcano in northwest Argentina. Using liquid chromatography–mass spectrometry, they discovered higher levels of benzoylecgonine and cocaethylene – metabolites indicating the presence of cocaine and alcohol – in samples of hair closer to the scalp.

The Incan rite of capacocha demanded that boys and girls were sent from the provinces for sacrifice. First they were brought to the imperial capital Cuzco, now in modern day Peru, for feasting and celebration, before being taken to the place of sacrifice, often thousands of miles away. The Llullaillaco Maiden was buried along with two other, younger children. However, the group found lower levels of alcohol and cocaine in samples from these children, indicating they were treated differently from the older girl.