A sensor that can differentiate between the volatile organic compounds in the breath of lung cancer patients and those of healthy people has been developed by scientists in Israel. The device may eventually lead to a cheap, portable real-time breath test for the disease that can be used in the doctor’s surgery.

The team, led by Hossam Haick, at Israel Institute of Technology (Technion) in Haifa, made a sensor containing multiple gold nanoparticle-based chemiresistors that can detect chemicals through changes in electrical resistance.  Each sensor has nine different chemiresistors, made of gold nanoparticles coated with different thiol-based organic films.

’The metallic particles provide the electric conductivity and the organic film component provides sites for the sorption of analyte molecules,’ explains Haick. The film is selective and swells in response to certain chemicals, causing the nanoparticles to be pushed apart and therefore increase the resistance across the device.

Each of the thiol films were designed to be broadly responsive to a variety of the volatile organic carbons (VOCs) that are characteristically in the breath of lung cancer sufferers. ’Each analyte [therefore] produces a distinct fingerprint from the array of broadly cross-reactive sensors,’ says Haick. ’This considerably widens the variety of biomarkers to which a given matrix is sensitive.’ And it is this that allows them to look at levels of 33 common VOCs found in the breath of most cancer patients using just nine different chemiresistors. 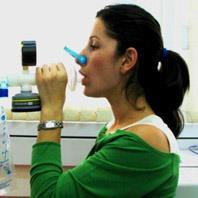 Before the films could be designed though, the team first had to identify the VOCs that could act as biomarkers for lung cancer in breath. To do this they collected breath samples from a selection of healthy people and cancer patients, and determined their compositions using gas chromatography-mass spectrometry (GC-MS).

The analysis identified 300-400 different VOCs per breath sample, which the researchers narrowed down to 42 that were found in at least 83 per cent of lung cancer patients and fewer than 83 per cent of healthy subjects. Nine of these were relatively uncommon VOCs, so the team focused on the remaining 33.

’Conventional diagnostic methods for lung cancer are unsuitable for widespread screening because they are expensive and occasionally miss tumours,’ says Haick. With lung cancer currently responsible for around a quarter of cancer-related deaths in the US and UK, and 1.3 million people dying from this disease worldwide each year, a large number of researchers are working towards more effective, cheaper diagnostic tools - including breath tests.

Previously, Haick’s team had developed a similar sensor based on carbon nanotubes rather than gold nanotubes. However this sensor required the breath samples to be pre-treated, whereas patients can breathe straight into this latest version without the need for time-consuming sample preparation.

David Smith, an expert in breath analysis at the University of Keele, UK, describes the research as extremely interesting, but says that a lot more work and full clinical trials are needed before these can be used by doctors: ’This is elegant laboratory work that looks extremely promising, but it still has a long way to go before you can claim that you have a breath test for lung cancer.’