US researchers have developed a process that could bring the unusual properties of nanoparticles to a larger scale, by using small molecules to evenly space nanoparticles in a polymer composite.

In previous attempts to make nanoparticle-based materials, the particles are often randomly distributed in the mix - resulting in their interesting properties being lost. ’To take advantage of the unique properties of nanoparticles, they need to be arranged in a very specific way,’ says Ting Xu, who led the group at the University of California, Berkeley, US. 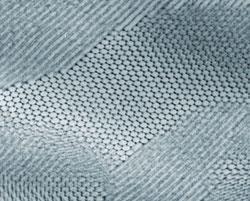 By combining small molecules and block copolymers, nanoparticles are directed to assemble into linear or hexagonal structures

’For example, in organic photovoltaics, the nanoparticles need to be very close to one another and aligned carefully so electrical charges can be transported to electrodes,’ Xu says. ’Our process can achieve this synergy, which will hopefully allow for the development of many useful functional devices.’

The team solved the problem by adding a third component to the starting mix:  small molecules shaped like combs. When nanoparticles are synthesised, they are often covered with a kind of ’hair’: layers of ligands that prevent them from sticking together. The comb molecules grip onto these ligands tightly - and as a result, the nanoparticles become evenly dispersed in the monomer solution.

Crucially, when polymerisation is triggered, the comb molecules join the polymer chains as a block copolymer. This means that the comb molecules, and therefore the nanoparticles, are regularly spaced along the polymer backbone. By tweaking the quantities of each ingredient, Xu’s team were able to make a variety of patterned nanostructures - such as thick and thin repeating lines of nanoparticles, or a hexagonal grid-like pattern.

’This is a beautiful piece of work that will be useful to a lot of people,’ says Thomas Russell, an expert on building polymers at the University of Massachusetts in Amherst, US. ’The precision to which nanoparticles can be organised within a material here is unprecedented.’

’There is also a lot of versatility - which is very important when you are trying to integrate the nanoparticle world with the synthetic polymer world,’ Russell told Chemistry World. ’By simply changing the teeth of the comb molecules, this process could be applied to almost any size, shape or type of nanoparticle.’

Xu’s team indicates that the technique should provide a simple and quick way to hunt for some novel materials.  So far, they have made polymers containing nanoparticles of gold, cadmium selenide, lead sulphide and cobalt iron oxide, but there are many other nanoparticles to try out. Since some of these have never been investigated on larger scales, there may well be some surprises in store.