US scientists have created a nanoparticle drug that acts like a stealth bomber to smuggle its RNA-interfering payload past the body’s defence systems and drop it on to cancer cells. It is, say the researchers, the first example of a nanoparticle that can seek out its target after being injected into the bloodstream and paves the way for the selective targeting of cells and tissues in the body while causing only little   ’collateral damage’ in the form of side effects.

"This is the first proof of concept that RNA interference can occur in a human from delivered siRNA" - Mark Davis, California Institute of Technology

The system aims to exploit the phenomenon of RNA interference (RNAi), where short sequences of double-stranded RNA, called small interfering RNA or siRNA, can trigger the disruption of the manufacture of certain proteins in a cell. RNAi holds great promise for the treatment of many diseases such as cancer, but a number of hurdles remain, not least delivering the RNA to the target cell.

’If you use pure RNA it is very quickly degraded in the bloodstream,’ says Mark Davis, of the California Institute of Technology, whose team carried out the new research. Even if the RNA is stabilised to survive in the blood, it can then be excreted via the kidneys. If this can be avoided, the RNA must then be taken to its specific target tissue.

Davis’s team has spent 15 years on the problem and has come up with a multi-component system that tackles each of the challenges. A cyclodextrin-based polymer (CDP) self-assembles with siRNA to create the basic nanoparticle in which the siRNA is protected from degradation. Polyethylene glycol containing the cycloalkane adamantane (AD-PEG) decorates the surface of the particle to provide stability against aggregation and binding to unwanted entities in the blood. Finally a targeting ligand is attached to the surface, the protein transferrin (Tf), which homes in on excessive transferrin receptors present on the surface of the cancer cells being targeted. 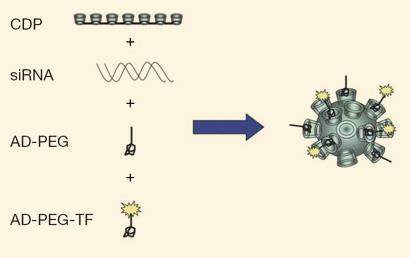 ’This is the first example of dose-dependent localisation of nanoparticles within cancer cells from systemic injection,’ says Davis, ’and the first proof of concept that RNA interference can occur in a human from delivered siRNA.’

Snow Stolnik-Trenkic, an expert in drug delivery systems at the University of Nottingham in the UK, says, ’At present effective siRNA delivery is considered the bottleneck in the proof of the concept of siRNA therapeutic potential and the translation of this potential into the clinic. The big advance of this new work is that it has for the first time been done in humans.’