A quick and easy way to take 3D images at the nanoscale with a single measurement has been developed by US researchers. The process works by bouncing a single beam of x-rays off an object, then collecting the scattered wave pattern using a curved detector. Since the process is accurate enough to pick up individual atoms, it is hoped the technique will become an important analytical tool.

’There has been no way to take 3D pictures from a single view until now,’ says Jianwei Miao, who led the research at the University of California in Los Angeles, US.

Typically, 3D images are constructed in two ways. One is by rotating the sample to take 2D pictures from many different angles - such as in x-ray crystallography - and the other is to take many planar slices and combine them together, such as in confocal microscopy.

’Our idea was to collect the data from a single beam using a curved surface - and this would let us reconstruct an image in 3D,’ Miao explains. ’We have named this process ’ankylography’, from the Greek word ankylos, which means curved.’

Ankylography is effectively a type of x-ray diffraction microscopy. First, a coherent beam of x-rays is fired at the target material and diffracted in all directions. A snapshot of this scattering pattern is then taken using a charge-coupled device(CCD) - similar to those found in modern cameras - which measures the trajectory and intensity of the diffracted  x-rays. 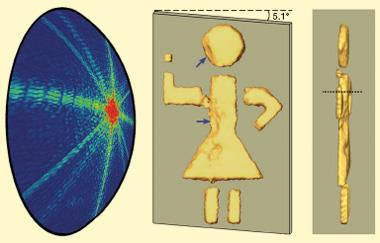 ’Ideally, we would like to use a spherical CCD to pick up this diffraction pattern, but these have not been developed yet,’ Miao says. ’Instead, we had to use a flat CCD, then mathematically calculate what the pattern on a spherical surface would be.’

The final step, once the diffraction pattern has been collected, is to use computer algorithms developed by the team to reconstruct the image. So far, the team has resolved the 3D structure of a silicon surface to an accuracy of around 0.2nm, and been able to pick out surface features around 2nm in size on the surface of a poliovirus.

Alan Roseman at the University of Manchester, UK, thinks the new method is exciting - but will need further development before it can be practical for analysing biological samples. ’There may be some problems applying this process to radiation-sensitive biological specimens,’ he says. ’The doses used in the simulation are high - although it may be possible to capture images before the effects of the radiation are seen.’

Although it is still early days, Miao is confident that ankylography could be improved and modified for many uses. ’We are optimistic that this process could become a powerful tool for looking at non-crystalline or non-periodic samples, where conventional 3D imaging systems struggle,’ he says.