Scotland-based chemists have invented a new way to build nanoscale arrays of molecules over a large surface area: a technique that may be key to making nanostructures in sophisticated sensors, catalysts, and tiny computer parts.

Their solution-based chemistry works by corralling atoms into tiny dimples, themselves created when molecules self-assemble onto a gold surface.

’We have shown that it is possible to control the assembly of single molecules,’ says Manfred Buck, who led the group at St Andrews University. ’The copper atoms in our final structure are less than 5 nanometres apart, which opens up the possibility of studying materials with extremely small dimensions.’

The team’s chemical patterning provides an alternative route to nanostructures created by conventional lithography, which etches away patterns in surfaces, but can struggle to be precise on scales of a few nanometres over large areas.

"’We have shown that it is possible to control the assembly of single molecules’" - Manfred Buck, St Andrews University

Buck’s team first created a honeycomb-shaped network on top of a gold surface, by mixing together melamine and a derivative of perylene (perylene-3,4,9,10-tetracarboxylic diimide or PTCDI). These two molecules spontaneously form a supramolecular network over the surface, creating pores which can be filled by other particles.

The chemistry of this spontaneous network-forming is well understood. The allure of forming a template which could subsequently be used to sculpt structures means the system has been investigated many times before. But this type of assembly normally requires high vacuum conditions so that it can be seen with scanning tunnelling microscopy, and there is little chance of using the fragile structure in real applications.

Buck’s network, by contrast, was stable enough to be dunked in different solutions of thiols (molecules with sulfur caps). This allowed monolayer films of thiol molecules to organise into coils inside the pores - as the sulfur atoms preferred to be near the gold than lie on top of the melamine/PTCDI layer. The team finally inserted copper atoms between the gold substrate and thiol molecules, making a nanoscale atomic structure strong enough to be handled under ambient conditions. 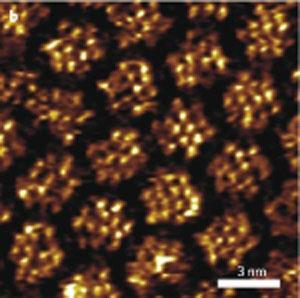 Monolayers of thiols form on a gold surface, held in between hexagonal frames created by self-assembling aromatic molecules

In principle, Buck hopes, it should be possible to change the length of the PTCDI molecules in order to change pore shape and what kind of guest molecule - perhaps a magnetic species, or a protein - could fit inside. The pores might be sufficiently tightened that just a single molecule could be accommodated.

’I am deeply impressed with this work. A few years ago I didn’t think it would be possible to carry out such reactions in solution and I think their findings are very significant. But at the moment this is just a demonstration about what can be done with such molecules,’ says Neil Champness, professor of chemical nanoscience at the University of Nottingham, UK.  The structures Buck’s team created haven’t been used to make anything else yet - though because they are robust and are created with solution-based chemistry, there is lots of opportunity for further modification as catalysts or sensors.

’In order to make these structures useful, we need to be able to introduce molecules or metal atoms which can store information, which could be magnetic or optical in nature. We would also need to be able to read and write this information on a realistic timescale. Even so, it is possible to imagine that these structures could be used to link up with other surfaces to produce an electronic signal - in effect a nano-sensing device,’ says Champness.