US researchers have pushed chemical force microscopy (CFM) to its ultimate limit by measuring the interaction of a single functional group with a carbon nanotube.

N). But the needle-like tip of the AFM probe is not small enough to allow the measurement of surface interactions with just a single functional group. In practice, several functional groups cluster around the AFM tip and all can interact when the AFM is lowered near a surface.

Much AFM research goes into making the probe tip smaller. But researchers led by Aleksandr Noy of the Livermore National Laboratory flipped the problem on its head and looked into making the surface smaller instead.

’With an AFM tip you can only go down in size so much, especially when it’s functionalised,’ Noy told Chemistry World. ’The "aha moment" for me was when I realised I can also play with the substrate curvature and that nanomaterials allow curvatures that are way beyond what an AFM tip could achieve.’

Noy’s team found carbon nanotubes to be an ideal candidate, as the highly curved walls of individual tubes brought surface contact down to around 1.3nm - small enough to measure a single functional group. 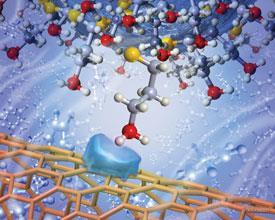 The scientists’ research was doubly unique because they were able to draw direct comparison with theory. The group’s collaborators did theoretical experiments which measured the forces in the same systems, and the results were close to identical. Noy said, ’Before our work there was a large gap between what theory and experiment could do, so it was quite exciting to plug in the calculated potentials and get out something that matched the experiment so closely.’

Julie Macpherson, a professor in chemistry at the University of Warwick, said looking at the problem in this way is ’a neat twist.’ Macpherson told Chemistry World the work is ’a real step forward, and could have big implications in the design and application of a new generation of nanotube-based chemical sensors.’ The interaction of functional groups with carbon nanotubes is also important in choosing materials with the right properties for nanotube composites.