A new way of peering inside biological cells using carbon nanotubes as tiny multifunctional endoscopes has been developed by US researchers. The team says its nanotube endoscopes allow many different cellular responses in a single cell to be studied in parallel without damaging the cell, and could be important for drug discovery and testing applications.

Now, a team at Drexel University in Philadelphia, Pennsylvania, US, has come up with an all-in- one solution in the form of nano-sized endoscopes made from carbon nanotubes attached to standard glass micropipettes. ’In many ways it’s similar to the kind of endoscopic tools physicians employ to probe the inside of a human body in a minimally invasive fashion. Ours is just many orders of magnitude smaller,’ says Gary Friedman, a co-author of the study.

The team made the endoscopes by using a fluid flow technique to place multiwalled carbon nanotubes at the tip of a glass pipette which were then sealed with epoxy. By filling the CNT with magnetic magnetite (Fe3O4  nanoparticles, magnets could then be used to create tiny deflections in the CNT tip to precisely control it. 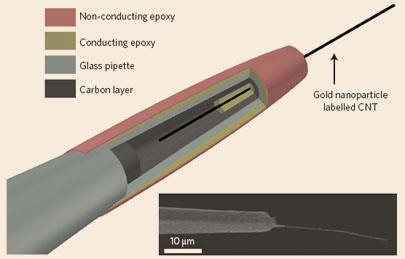 Experiments with the endoscopes revealed that optical signals observed via Surface Enhanced Raman Spectroscopy (SERS) from different regions within a cell matched existing observations on intracellular SERS. The team was also able to record electrochemical signals and transfer fluids and nanoparticles to and from a cell.

To determine if the endoscopes caused any damage the team looked at cellular calcium signals which increase when a cell becomes stressed.  In addition, they made microscopic observations of cellular membranes and intracellular filamentary networks. They found minimal cell damage occurred compared to that caused by standard glass micropipettes.

’This presents an extremely powerful multifunctional intracellular probing technology that can penetrate deep into cells, manipulate intracellular components remotely with high resolution, and perform optical and electrochemical diagnosis at the single organelle level,’ says Dejian Zhou, who develops functional nanomaterials at the University of Leeds, UK. ’Its main advantage over other cell interrogation technologies is the cylindrical shape of the probe, which allows for deep cell penetration without causing too much cell destruction,’ he adds.

’The CNT endoscopes can be used whenever someone wants to follow in parallel different cellular responses to extracellular stimuli or injections of various agents through the endoscope,’ says Friedman. ’This could be important in decoding various cellular signals, genetic and protein interaction networks useful for drug discovery.’