UK researchers have shown that carbon nanotubes can pierce plant root cells, providing a rapid route for other pollutants to infiltrate the cellular structure of plants.

Edward Wild and Kevin Jones from the University of Lancaster used three-dimensional images of live roots to look at how nanomaterials can affect uptake of other environmental pollutants, such as the polyaromatic hydrocarbon phenanthrene. They used a technique called two photon excitation microscopy coupled with autofluorescence (TPEM-AF), which exploits the natural fluorescence of carbon nanotubes and phenanthrene, to locate them within living root cells of wheat plants without the addition of tagging molecules.

With the growth in production of nanoscale materials for potential applications in fields such as drug delivery, advanced materials and electronics, there is an increased need to understand the fate and interactions of these materials in the natural environment. ’There are also suggestions that nanomaterials might be useful in bioremediation,’ says Wild, ’whether that’s cleaning up groundwater or removing pollutants from contaminated sites, so we were interested to see what interactions there would be [with typical contaminants].’ 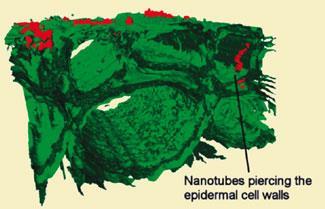 The TPEM technique allows the team to see exactly where molecules end up within the cellular structure of plants, bacteria or fungi. ’Using conventional analytical techniques we knew how much of a chemical was absorbed into, for example, a whole leaf, but we didn’t know exactly where it was going,’ explains Wild. ’That would have huge implications for the chemical’s fate - if it’s on the leaf surface it might be degraded, whereas once it migrates into the cellular structure it could be stored for long periods.’

The team’s microscope uses near-infra red light, which is focused into a very small volume within the sample. Since near-IR penetrates living tissues quite deeply, TPEM can create three-dimensional images without damaging the cells. ’In traditional microscopy,’ says Wild, ’thick samples would be frozen and cut into thin sections, and each one would be examined individually. With two-photon excitation you can make optical sections and build up a three-dimensional image by systematically adjusting the position of the focal point right the way through the sample.’

Wild adds that they can see up to 350 micrometres into root samples, to a depth of 3-5 layers of cells. The slide preparation allows the root to remain living, so they can monitor real-time changes in the precise location of both nanomaterials and phenanthrene within the cellular structure. The researchers examined nanoparticles of titanium dioxide and cerium dioxide and multiwall carbon nanotubes (MWCNTs) and found that nanotubes could significantly accelerate uptake of phenanthrene, a typical atmospheric polyaromatic hydrocarbon pollutant arising from burning of fossil fuels. This acceleration appeared to be caused by nanotubes piercing the cells and acting as pipes through which the phenanthrene could enter much more rapidly than it could otherwise.

’This kind of "Trojan horse" scenario has been talked about a lot,’ says Jamie Lead, a specialist in environmental nanoscience from the University of Birmingham, UK, ’but it’s nice to have confirmation and data to show that it is the case.’