Nanowires heading in the right direction

Holger Frauenrath at the Federal Polytechnic School in Lausanne and colleagues used molecular precursors that are capable of one-directional self-assembly. They prepared an oligopeptide from polymer segments attached to beta-sheet-forming oligopeptide segments, with a pi-conjugated segment at the centre. By carefully selecting the molecular precursors, the team ensured that non-covalent interactions promoted one-dimensional aggregation, while lateral aggregation was suppressed.

Frauenrath then used diacetylene compounds carrying oligopeptide-polymer substituents to deduce the parameters needed for successful self-assembly in a single direction. The team found that two factors were key: the length of the polymer segment and the number of hydrogen bonding sites in the oligopeptide segment. 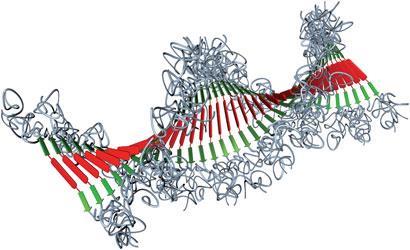 The team then switched the pi-conjugated segment from diacetylene to a p-type semiconducting segment and an n-type semiconducting segment and successfully applied the same method. According to John Tovar, an expert in supramolecular polymer chemistry and particularly incorporation of pi-conjugated molecules at Johns Hopkins University, US, this systematic tuning of the molecular fragments means that Frauenrath and co-workers have made ’an important structure-function contribution’ that paves the way for rational and predictable construction of functional supramolecular electronic materials.