Never shut down another person’s ideas

Vy Dong is a professor at the University of California at Irvine, US. Her group investigates better tools for organic synthesis, including new reagents, catalysts and strategies. 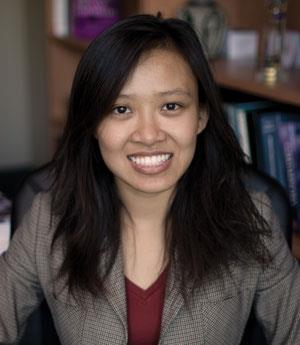 What inspired you to study science?

During university, I was interested in both the sciences and the humanities, and so I took an advanced English course. After long discussions on different ways to interpret the story, I was frustrated because the instructor would never say whose interpretation was the right one. This frustration solidified that science suited me better, because you can come up with creative proposals and there’s this opportunity to test them and see if they’re valid or not.

What led you to chemistry in particular?

Taking Larry Overman’s sophomore organic chemistry class at the University of California at Irvine was a big turning point for me. Before that I was studying a major between biology and social science, called applied ecology. Larry is an amazing teacher.

A focus of your research is catalysis – could you tell us about a key project you’re running right now in your lab and why you find catalysis so attractive?

One of the major projects in my group right now is focused on catalytic hydroacylation. We want to find ways to selectively activate aldehyde C–H bonds to synthesise ketones, esters and amides. Our goal is to use this C–H activation strategy as a unified approach to all sorts of different heterocycles and polyketides and be able to do this in a way that is regio-, enantio- and chemo-selective. There’s something very attractive about catalysis – you can get things to transform that normally wouldn’t by adding a bit of this magical powder.

What would you say is the major challenge in catalysis?

For my group, the challenge is: how do we bridge that gap from finding something that is novel in reactivity to something that’s going to be wide in applications? It is a difficult challenge, but inspiring to see how catalytic transformations, like metathesis or hydrogenation or cross-coupling, have changed the way people make molecules.

I wish there was a journal we could just flip through. Initially I worried that coming up with ideas was impossible, but new ideas pop up all the time through interactions with my students. My students will suggest something and I’ll suggest something else and this going back and forth is what generates and refines our ideas. It’s important for both sides to never shut down the other person’s ideas, but rather build upon them.

One of my students suggested an experiment and instead of saying ‘that’s known with a different catalyst, let’s not do it,’ I said ‘sure, try it and see what happens.’ The result was not what either of us expected. Instead of saying ‘well, this result is interesting but maybe not that interesting,’ we tried to realise the potential in the result, thinking of all the possible ways that we could take it in different directions. That’s how we got started on the ketone hydroacylation project!

In many ways, my life as an academic in Canada and the US is not too different. My team moved with me so there was a nice continuity when we moved to California. But there are key philosophical differences in student training and proposal writing.  For example, Canadian students are often encouraged to continue graduate studies at their undergraduate institutions, whereas in the US, students are encouraged to go elsewhere. Canadian graduates enter a master’s programme, and some continue with the PhD. It’s the opposite in the US, where students enter a PhD programme, and some leave with their master’s. For NSERC [The Natural Sciences and Engineering Research Council of Canada] proposals, about two-thirds of the score depends on a principal investigator’s track record and the number of students he/she has graduated. US funding agencies judge proposals mainly on the potential impact of the ideas and quality of the preliminary results.  I would say that my colleagues in Canada, compared to my colleagues in the US, spend less time writing grants. There’s more support from the government in Canada in the form of student fellowships, both at the provincial level and at the federal level.

What made you come back to the University of California at Irvine?

It was definitely a big decision to make. I really love it at UCI, it’s a very team oriented and a very young university – the entire school is less than 50 years old, so we are modern in terms of thinking about the future, how to continually improve the programmes, and attract the best people.

You’re extremely enthusiastic and it’s contagious but what would you say you like most about your job?

What I love most about the job is the diversity of challenges. There are many hats to wear—teacher, student, writer, editor, coach, chemist. There are interactions with many different people; from a Nobel laureate one day to a troop of girl scouts the next. There is something new happening in my lab each day, and I wouldn’t be able to predict 10 years from now what my research group will be working on, and that’s all exciting to me.

What advice would you give students wanting to pursue a career in chemistry?

I would say, never forget the childlike enthusiasm you have for science. I’ve been participating in an outreach program where little kids visit and they get so excited about seeing colour changes or liquid nitrogen or hydrogen balloons exploding. I wonder if you had that same kind of outreach programme for children where you taught them about investment banking – what would that be like? It’s important to remember that science is extremely fun – it’s also very difficult, but never forget the enthusiasm you have as a kid and why you liked science in the first place.

I’ve thought that in a lot of ways, being the head of a research lab is like running your own business, so if I weren’t doing this I would enjoy having my own business as I could work for myself, hire people that I really enjoy working with and produce something I am really passionate about, something that I think would benefit society. Being hypothetical, the business would probably involve snorkelling tours in Bora-Bora or something like that.

As a woman in science, do you think there are many difficulties that prevent more women from joining the fun?

I feel the next generation is becoming more and more progressive and I feel that women know they can pursue any career they like, but I’m lucky to be in the western world and it’s not that way for women everywhere. At the same time, I feel it can be challenging for women in academia, because there is a big demand on your time and if you want to balance that with having a family you have to make sure your partner is really supportive and flexible. I think it’s also true for men, but maybe the expectations and challenges are slightly different. Universities having options for maternity leave and childcare can really help – simply to show to young women who are moving into that direction that it is something that their department is supportive of. I think, for example, Stanford University and the University of Toronto are really progressive and have some leave even for graduate students who are about to become mothers. Those are creative ways to show you are ready to support a balance between career and family life.

And finally, is there a message you’d like to shout out that’s close to your heart?

I’d like to encourage people to do what they love and be nice to each other!