Chemists in Japan have developed what they hope will become a speedy, environmentally benign approach to cleaning up oil and solvent tanker spills. With an ever-increasing number of tankers carrying oil and other volatile organic chemicals (VOCs) around the world, spillages are sadly inevitable.

The environmental impact can be disastrous, not least because there are so few clean-up options. Current options are limited to burning or dissolving the chemicals by spreading detergent or hoping for bad weather. Kazuki Sada and colleagues at Kyushu University have developed a new class of superabsorbent polymers that can swell to hundreds of times their weight by soaking up nonpolar organic solvents. Superabsorbent polymers are already used to absorb water in a wide variety of applications, including nappies and cosmetics, but this is the first time that less-polar liquids have been absorbed effectively.

The superabsorbing-power comes from electrostatic repulsion between ionic groups fixed on the polymer, allowing the chain to stretch out and expand as solvent molecules are held in the structure. However, these polymers have a limited ability to absorb oils or VOCs, as the ions in the polymer become aggregated and cause the structure to collapse.

Sada’s team  solved this problem by using small amounts of a bulky lipophilic ionic group (one that also dissolves easily in nonpolar organic solvents) to the polymer chain. The team attached tetra-alkylammonium tetraphenylborate ions to 5 per cent of the monomers that make up the polymer. The polymer - a lipophilic polyelectrolyte gel - could swell to 384 times its weight in tetrahydrofuran and 481 times in dichloromethane.   It also showed a good ability to absorb very nonpolar solvents, such as hexane and toluene. 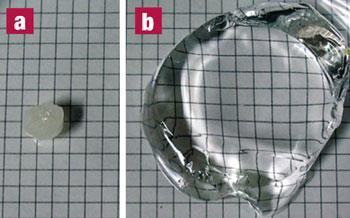 Lipophilic polymer gel: dried (a); and swollen in tetrahydrofuran for 48 hours (b)

Oil spills can take several years to clean up, and affect hundreds of miles of coastline. It is hoped that these polymers will contain spillages early to prevent environmental catastrophe. ’There are still difficulties to be overcome, but our result is the first step towards making such materials,’ Sada told Chemistry World. ’We do not yet know whether our materials are environmentally friendly or not, but our goals are to keep working towards clean, cheap and effective materials that have useful applications.’

Peter Lovell, professor of polymer science at the University of Manchester, UK, thinks there could be other benefits. ’This research could certainly be useful in the future,’ Lovell told Chemistry World. ’Polymers like these could potentially find uses in organic chemistry, perhaps as solid-supports, for example.’