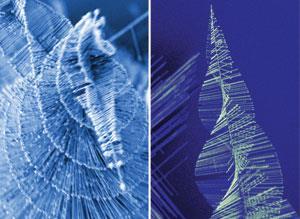 Growing nanowires in pretty patterns - including coils, flowers and belts - is not just a pastime for chemists with an artistic bent. Such branched building blocks have proven useful in photonics, solar cells, biosensors, catalysts and composites. But usually, explains Song Jin at the University of Wisconsin-Madison, pattern-growers need to add a second metal nanoparticle catalyst around which atoms cluster to guide nanowires into particular structures.

Not so for the lead sulfide pine trees. Screw dislocations in the crystal cause atoms to stack in one dimension on what becomes a quickly-growing trunk. The branches form more conventionally by clustering around lead nanoparticles generated in situ.

’We think these findings will motivate a lot of people to do this purposefully: to design dislocations and try to grow nanowires around them,’ says Jin, publishing in Science  (DOI: 10.1126/science.1157131).

An international team of researchers has shed light on the mystery of why seaweed releases iodide ions, which may

act as cloud-forming nuclei, into the atmosphere. Frithjof K?pper from the Scottish Association for Marine Science and colleagues, publishing in Proceedings of the National Academy of Sciences USA(DOI: 10.1073/pnas.0709959105), explain that large brown kelp store iodine in the form of iodide, and release the ion in response to stress.

The iodide mops up reactive oxygen species and so protects the kelp from damage when it’s exposed to strong sunlight or is in danger of drying out during low tides. That means the iodide is acting as the first known inorganic - and the most simple - antioxidant in any living system, according to the team.

Iodide probably doesn’t have the same role in humans, however - our bodies couldn’t cope with the high concentrations required. But the iodine that accumulates in the thyroid may have originally had a role as an antioxidant.

Australian scientists have warned that the rising cost of mining uranium could challenge the case for nuclear power as a low carbon energy source. Gavin Mudd and Mark Diesendorf from the University of New South Wales, Sydney, say that high-grade uranium ore is becoming scarcer - making uranium fuel extraction more costly and less friendly to the environment.

The research, published in Environmental Science & Technology  (DOI: 10.1021/es702249v), is the most detailed analysis yet of the energy and water consumption, and carbon emissions, resulting from uranium mining. But Thierry Dujardin, of the Nuclear Energy Agency, says even in a worst case scenario, the impact of nuclear power on greenhouse gas emissions is still very small compared with burning fossil fuels.

Scientists claiming to have discovered the super-heavy element 122 (unbibium) have had their research dismissed by physicists who say their measurements are suspect.

A collaboration of researchers led by Amnon Marinov at the Hebrew University of Jerusalem say their mass spectrometer has detected something with an atomic mass around 292 in piles of purified thorium. They think this is a long-lived nucleus with 122 protons and 170 neutrons. The research is described in an article posted to the internet pre-print server, arXiv (arXiv:0804.3869) but has not been peer reviewed.

The periodic table currently ends at element 118, and scientists contacted by Chemistry World  were critical of the team’s findings, saying they would need much stronger evidence to get published.

Marinov says he has submitted the article to the journals Natureand Nature Physics, but both turned it down without
sending it for peer review.

So-called ’superlenses’ which focus light beyond the physical diffraction limit - allowing users to focus in on objects less than half the size of the light’s wavelength - are usually fiddly and expensive pieces of kit.

But Anthony Grbic and colleagues at the University of Michigan, Ann Arbor, US, have now used conventional photolithography to make patterned, flat grating-like surfaces which improve resolution beyond the diffraction limit. Their simple design was theorised last year.

The research, published in Science  (DOI: 10.1126/science.1154753), involves etching copper away from a teflon and ceramic base, to leave a series of capacitors which interact with electromagnetic waves, focusing them into a point 10 times tighter than can be achieved by conventional lenses. So far, the prototype works on microwaves but can be adapted to any wavelength of light.

Researchers at the University of Washington, US, have created a new computer game, ’Foldit’, to turn protein folding into a competitive sport. The Tetris-style problem solving exercise allows people to fold and curl proteins into three-dimensional structures, and uses mathematical and physical rules to award points - the more chemically stable a structure, the more points gained.

Computer simulations are currently used to calculate all possible protein shapes, but the game’s developers hope to engage peoples’ problem-solving skills to resolve biological mysteries that could help develop new drugs and vaccines. The game can be found on website.

Researchers have found a new family of high-temperature superconductive materials, based on iron rather than the traditional copper. The discovery has renewed hopes of making materials that can levitate magnets and carry electric current with no resistance at room temperature (for other applications, see Chemistry World, February 2008, p42).

Progress has stalled on improving the temperature at which copper-based superconductors (first identified in 1986) work: the record, 138K, was set back in 1995. But in February 2008, Hideo Hosono and colleagues at the Tokyo Institute of Technology published details in Journal of the American Chemical Society  (DOI:10.1021/ja800073m) of new compounds with an iron-arsenic filling sandwiched between lanthanum oxide layers, which were superconductors up to 23K. When the pressure was increased, they reported in April in Nature(DOI: 10.1038/nature06972), the superconductivity reached 43K. Superconductivity above 50K is being reported on pre-print servers for similar materials, such as samarium oxide/iron-arsenic compounds.

The new iron-based superconductors are harder to work with than copper materials, but offer another route to working out the mechanisms of high-temperature superconductivity. 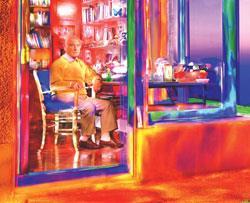 Hofmann: ’I never imagined that LSD could be used as a pleasure drug

Swiss chemist Albert Hofmann, the discoverer of lysergic acid diethylamide (LSD), died at the age of 102 on 29 April at his home in Basel.

Hofmann first produced LSD in 1938 while working in the Sandoz pharmaceutical laboratory (now Novartis). A few years later he ingested some of the drug through his fingertips and experienced what he described as visions of ’fantastic pictures, extraordinary shapes with intense, kaleidoscopic play of colours’.

Hofmann became a world authority on the chemistry of naturally occurring psychoactive materials. He authored more than 100 scientific articles and wrote a number of books, including LSD: My Problem Child. The occasion of his 100th birthday on 11 January 2006 was marked by an international symposium on LSD.

Plans to shake up the way UK university research is assessed and funded have been delayed by a year - and peer review has come back into the mix for judging the quality of science.

Under the Research Excellence Framework (REF) - which replaces the Research Assessment Exercise (RAE) in allocating more than ?1.4 billion from government to universities - a department’s quality of scientific research was to have been reckoned purely by metrics: statistical measures such as article publications and citations.

But John Denham, minister for the UK’s Department for innovation, universities and skills (Dius), has now announced that expert panel opinion will contribute to judging scientific research quality alongside metrics. In another alteration to original plans, arts and sciences alike will be judged by the same system. The delayed REF will now not come fully into effect until 2014 (see also comment).