US researchers have found a new way to use magnetic fields to encourage nanoparticles to self-assemble into unique shapes, including ’flowers’. The process should provide access to novel nanomaterials with useful properties, they claim.

Nano-flowers can be made from rings of rings

The team, based at Duke University and the University of Massachusetts, have mixed together different nanoparticles in a ferrofluid - which is essentially magnetic iron oxide nanoparticles in water. They then applied a magnetic field to this suspension, and watched structures form in the liquid.

Typically, when a magnetic field is applied to a suspension of magnetic particles, they behave like dipoles - aligning with the field and forming chains. But the team, who published these results in Nature  (DOI: 10.1038/nature07766), found that where there is a certain mixture of magnetic and non-magnetic particles, different shapes can form. Each magnetic bead becomes a tiny magnet producing its own field. This field is lowest around its equator, so smaller non-magnetic nanoparticles prefer to arrange themselves side-by-side in a ring around the bead.

The team say that these particles could act as infrared antennae, making them an interesting component for metamaterials, which are currently being investigated for use in invisibility cloaks.

In a bid to ease the pressure on its peer review processes, UK research funding body the Engineering and Physical Sciences Research Council (EPSRC) has announced that it will start excluding unsuccessful applicants from submitting further applications. From 1 June 2009, applicants will be banned for 12 months if, within a two-year period, they have three or more proposals not ranked in the top half of a funding prioritisation list, plus an overall personal success rate of less than 25 per cent.

UK chemists have not welcomed the change. While EPSRC claims that only 5 per cent of applicants would be affected by the new rule, academics argue that competition for grants is such that the impact could be far greater. As Chemistry World  went to press, over 1000 chemists had signed a petition to the UK Prime Minister calling for the change to be repealed.

US scientists have taken a novel step towards fighting the reoccurrence of lung cancer, using drug-delivering nanoparticles designedto carry the anti-cancer drug Taxol. The nanoparticles switch behaviour from hydrophobic to hydrophilic upon entering the acidic environment of a cell, causing them to swell and the drug to escape.

After a lung cancer tumour has been removed, sometimes residual cancer cells are left in the surrounding area. The team, publishing in Journal of the American Chemical Society  (DOI: 10.1021/ja807416t), intend that the nanoparticles will be applied to this problem area, on the operating table, immediately after the tumour removal.

Billions of dollars for US research

US president Barack Obama has signed into law a massive economic stimulus bill that contains an extra $21.5 billion (?15 billion) in federal research and development support.

The biggest winner is the nation’s biomedical research agency - the National Institutes of Health (NIH) - which scored an extra $10 billion on top of its current $29 billion budget. The physical science agencies also received a windfall, the National Science Foundation (NSF) is to get an additional $3 billion and the Department of Energy’s (DOE) Office of Science an extra $1.6 billion. This new money is on top of their respective budgets of $6 billion and $4 billion. The measure, which was enacted on 17 February, provides an immediate cash infusion and gives the agencies until September 2010 to spend the extra money.

A portfolio of affordable solar energy solutions is being considered by US researchers. After analysing a range of potential photovoltaics, they suggest that materials such as iron sulfide, copper sulfide and copper oxide could trump today’s silicon solar cells, both in terms of cost and the ability to be produced on the scale needed for solar cells to become a much larger player in the green energy market.

The team based at the University of California, Berkeley, assessed the availability and extraction costs of 23 promising semiconducting materials and found that nine are cheaper than silicon and also have the capacity to meet or exceed the global energy need. The research is reported in  Environmental Science & Technology  (DOI: 10.1021/es8019534).

The responses of authors and journal editors to cases of potential plagiarism have been probed by US scientists.

The team led by Harold Garner at the University of Texas Southwestern Medical Center used a self-developed text-searching tool to analyse millions of articles in Medline, a database of biomedical research articles. From a pool of 70,000 highly similar articles, they selected 162 pairs of articles with signs of potential plagiarism. Questionnaires were then sent to the authors of both the earlier and later articles, and the editors of both articles.

Publishing in  Science  (DOI: 10.1126/science.1167408), the team say that only 60 of the duplicate authors responded and of these only 35 per cent admitted to plagiarism.  While the aim was only to collect information on how people responded, their questionnaires did lead to 83 internal investigations by editors with 46 of these articles being retracted. 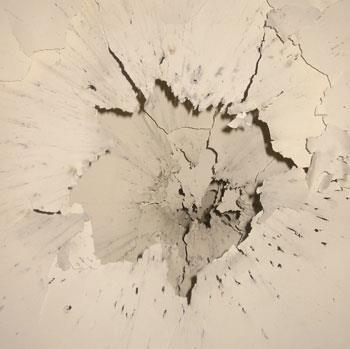 The London-based artist says she is turning bombs from a destructive tool into a force capable of creating beauty. To do this work she will be using the safety test site for Germany’s Federal Institute for Materials Research and Testing (BAM) in Berlin, a facility designed for testing chemicals, fireworks and other explosives. She plans to set off bombs - made of black powder, detonating caps or plastic explosives - above stencilled sheets of bamboo and mulberry paper.

Her latest results will be exhibited in August this year at the allgirls international art gallery in Berlin in a show called
Blowing My Dreams Away  .

A new way to activate brain neurons that could lead to less invasive methods of restoring function in damaged nerves and brain tissue has been developed. The US-based researchers used tiny micropipettes coated with light-activated semiconducting nanoparticles to wirelessly stimulate neurons in samples of rat brain.

The devices are made by coating the interior of very fine microtip pipettes with lead selenide nanoparticles. On exposure to near infrared laser light an electrical field builds up around the microtip and this electric field then stimulates the neurons.

The scientists, publishing in Angewandte Chemie International Edition  (DOI: 10.1002/anie.200806093), say they are planning to embed these devices directly into brain tissue, and control them in such a way that they closely replicate natural nerve activity.

Photosynthesis could have been flourishing on Earth nearly a billion years earlier than previously thought, according to a study by US geochemists.

The oldest fossil record of photosynthetic bacteria predicts their origin at around 2.7 billion years ago. But new evidence could push the figure back to 3.46 billion years ago - provoking new questions about how life might have evolved on an early Earth.

The team analysed rocks in Pilbara Craton, Western Australia and found the iron mineral haematite, chemical fossils of oxygen molecules, which suggest that the free oxygen content of deep ocean water 3.46 billion years ago was at least 10 per cent of the oxygen present today. They say that this is a tell-tale sign that photosynthetic life was thriving at this time. The research is reported in  Nature Geoscience  (DOI: 10.1038/ngeo465).