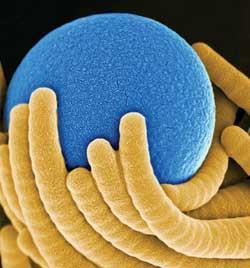 Tightly clasped spheres can be released on demand

US scientists have discovered that soft nanoscale bristles can be induced to twist together into tight chiral coils, simply by evaporating a liquid away from the nanobristle surface. The bristles will also wrap around tiny spheres, which they grip so tightly that even sonication doesn’t tear the sphere away. However, simple changes to the bristles’ environment, for example by adjusting the pH, relaxes their grip - suggesting the system could be developed for drug delivery.

The Harvard team, who published their findings inScience  (DOI: 10.1126/science.1165607), were inspired by the helical structures found throughout nature, from the DNA double helix to the cellulose fibrils that make up wood.

The group found that surface tension was responsible for pulling the nanobristles together into coils as a solvent was evaporated, spontaneously forming chiral structures from an achiral environment. By biasing the bristles by building them to have an initial tilt, the scientists could control the direction in which the spiral of bristles would form.

After decades of pursuit, a molecular hybrid of benzene and its inorganic equivalent, borazine (B3N3H6), has finally been synthesised. The creation of 1,2-dihydro-1,2-azaborine (C4BNH6) should allow chemists to probe deeper into aromaticity’s stabilising effects, and could provide a new molecular motif for biomedical and materials applications.

As anyone who’s taken biology 101 will know, DNA stores its information as long strings of codons, each three-base-long codon representing one specific amino acid. But it seems that Euplotes crassus  must have missed class that day. For this marine microorganism, the codon UGA can code either a cysteine or a selenocysteine, apparently depending on its relevant position on the messenger RNA, say scientists from the University of Nebraska in Lincoln, US, and colleagues. The findings are published in Science  (DOI: 10.1126/science.1164748), and raise the possibility that more organisms may be using their codons in this way, challenging a core theory of genetics.

Europe’s first medical centre equipped to treat cancer using carbon ion therapy is soon to open in Heidelberg, Germany - and should allow the extensive clinical trials needed to prove the worth, or otherwise, of the controversial technique. Beams of carbon ions should theoretically prove more effective than x-rays at treating certain types of cancer, as they penetrate deep tissue more effectively, and release most of their energy at a highly focused point, reducing the damage to surrounding healthy tissue. The ions can also directly cleave double stranded DNA, unlike other radiation sources, which work indirectly by generating free radical oxygen species and so are ineffective against hypoxic tumors.

The US Food and Drug Administration (FDA) is failing to properly police the financial conflicts of interest of doctors conducting clinical trials for new drugs and medical devices, US government investigators have reported. An investigation by the inspector general of the Department of health and human services has revealed that the FDA failed to secure the necessary data from doctors in 42 per cent of trials.

The FDA rules on financial disclosure are intended to ensure clinical trial data isn’t skewed in favour of the drug company sponsoring the trial. However, FDA officials told inspectors that collecting such data as part of the pre-trial procedure was not worth the effort - contravening its own rules on the subject.

Plants can’t make methane, a team of UK scientists have concluded, after subjecting a series of plant species to a barrage of tests. Their findings contradict the controversial conclusions of Frank Keppler’s 2006 study, which claimed plants produce significant quantities of methane, a potent greenhouse gas (see Chemistry World  , June 2007, p23).

The latest research, published in Proceedings of the Royal SocietyB  (DOI: 10.1098/rspb.2008.1731), finds that plants possess none of the necessary biochemical machinery microorganisms use to make methane. The team conclude that plants may transpire methane taken up from the soil, or may release it when plant material is broken down under high UV stress, but never biosynthesise it. However, Keppler maintains that plants may possess previously unidentified methane-producing biochemical pathways.

Carbonates and methane on Mars

New snapshots of Mars, taken by NASA’s exploration satellite the Mars Reconnaissance Orbiter, appear to show large outcrops of carbonate-bearing rocks, indicating that regions of the Red Planet could once have been an ideal environment for life to thrive. The images, published in Science  (DOI: 10.1126/science.1164759) reveal kilometre-sized areas of rock containing magnesium carbonate,The findings support the theory that life could have arisen on Mars, because the watery conditions needed for carbonate-bearing rocks to form would also have been favourable for life. 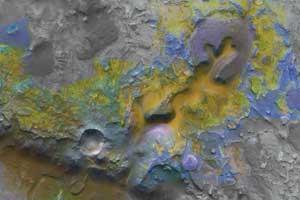 Meanwhile, infrared spectrometers at three Earth-based telescopes pointed at Mars have detected strong seasonal emissions of methane on the red planet. The emissions are at similar levels to some sites on Earth, and suggest active geological - or possibly biological - sources. The researchers, publishing in Science  (DOI: 10.1126/science.1165243), say more studies are needed to identify the source of the gas.

The US Environmental Protection Agency (EPA) is facing further criticism after delaying its regulation of perchlorate in drinking water. On 8 January, the agency declared an ’interim’ safe limit of 15 ppb in water supplies, but postponed any regulatory action on perchlorate until additional studies are completed by the National Academy of Sciences.

The calls for regulation, including from the Senate environment and public works committee, come after studies found perchlorate interferes with the thyroid gland, and can affect brain development and growth, particularly in foetuses and babies. In October 2008, EPA announced it wouldn’t set any perchlorate safety limit, because such a limit offers no ’meaningful opportunity for health risk reduction’, since most public water supplies don’t contain high levels of the contaminant. However, the agency subsequently received over 32,000 public comments, and reversed its decision not to act.

The first test flight of a passenger jet fuelled partly by algal biofuel has been completed in Houston, Texas. The twin-engined Boeing 737-800 gave a textbook performance with one engine running on standard jet fuel, and the other running a 50:50 jet fuel-biofuel blend.

The flight is the latest in a series of biofuelled tests, initially sparked by Virgin Atlantic ( Chemistry World, February 2008, p6), but is the first to employ algal fuel, if only in small proportions. Algal fuel made up just 2.5 per cent of the blend, with the remaining 47.5 per cent derived from jatropha oil.

While jatropha plants can be grown in poor soils, it is fast-growing, high-yielding algae that are widely touted as the future of biofuels - although the algal oil production process is still in its infancy (see Chemistry World, December 2008, p10).