In international team of researchers has made an elusive component of organic electronics - a flash memory transistor that can be incorporated into a thin, flexible plastic sheet. 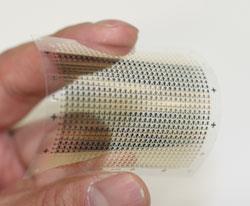 Rigid silicon flash memory transistors, that store electronic information without the need for a power supply, are used in devices such as MP3 players. Creating flexible organic analogues is desirable for applications like large-area sensor arrays.

Flash memory uses a floating gate, where the conducting component is enclosed in an insulating material. Data is written to it by applying a large voltage that ’jumps’ the insulation gap. The charge is then retained within the insulating layer, storing the memory.

Finding an insulating material for organic systems that is thin enough to allow charge transfer, while being able to be processed at low enough temperatures that the plastic support does not melt, has been problematic.

This new device - described in Science  (DOI: 10.1126/science.1179963) - has a 6nm thick, insulating hybrid layer made of n-octadecylphosphonic acid and aluminium oxide that can be processed at low temperatures. The floating gate inside it can be programmed and erased by a potential difference of 6V, similar to that of
silicon-based devices.

The US investment of $979 million from the Department of Energy and $2.2 billion from industry will pay for two commercial scale pilot projects to retrofit CCS equipment to two existing coal-powered powers plants and one to integrate the technology into the build of a new plant. The EC funded pilot projects are also a combination of retrofitted and new build technology.

At the same time the EC announced a further

Metal-organic frameworks (MOFs) have been coded by varying the amount of luminescent lanthanides built into their framework, meaning they emit unique light spectra that can be read like a coloured barcode. These materials could be used as invisible security tags for money, credit cards and parcels, say the US team that designed them.

MOFs containing two or three different near-infrared emitting lanthanides have been prepared, each with distinct spectroscopic signals. By varying the amounts of lanthanide salts used in the synthesis, the framework can be tailored to emit a specific spectrum of light. Publishing in the Journal of the American Chemical Society  (DOI: 10.1021/ja907885m), the team say they are confident that the code can be expanded in future to contain at least six different lanthanides.

US researchers have devised a route to ultraflat graphene - sheets of carbon a single atom thick - by sticking them to an atomically-smooth inorganic surface. They believe that removing the ripples that are characteristic of graphene sheets could change its properties.

The team, from Columbia University, wanted to determine whether the rippling occurred naturally or was a result of being deposited on uneven surfaces. They found that mica, consisting of aluminosilicate layers linked by single layers of potassium ions, provides a flat enough surface to fully suppress the ripples.

Publishing in Nature  (DOI: 10.1038/nature08569), the scientists say they expect the flattened material to react differently, as curvatures in the surface are likely to encourage hydrogenation. Expected changes in electrical properties can not be examined yet, as mica surfaces are insulating.

The EU has adopted new counter-terrorist measures, prompting an outcry from industry representatives that they could duplicate existing security procedures and increase administrative burden on the chemical sector.

The action plan contains a range of measures to strengthen chemical, biological, radiological and nuclear security in the EU, with the aim of reducing the risk of high risk materials being used as weapons.

The European Chemical Industry Council and European Association of Chemical Distributors have already voiced concerns over duplication of certain aspects of the new plan with good practice already in place. Additionally, it is not clear how the new regulations will link with, replace or duplicate the Reach (registration, evaluation, authorisation and restriction of chemical substances) legislation.

A group of 41 Nobel prize winning scientists, including 16 chemists, are urging the US Congress to require the results of federally funded research to be made freely available online - a position opposed by the American Chemical Society (ACS).

In an open letter the Nobel laureates endorse the Federal Research Public Access Act of 2009 - legislation that would mean 11 US government agencies had to make journal articles resulting from their grants freely accessible. These papers would be housed in a digital archive and be available at no charge within six months of publication in a peer-reviewed journal.

An ACS spokesperson says that publishers deserve financial compensation for the value that their peer review process brings to government-funded research, and that the bill will make it much harder for scientific journals to sustain operations because people will no longer need to pay to access the articles. 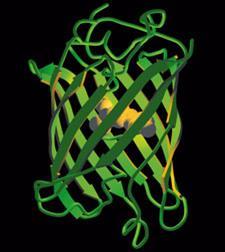 Spectroscopy can ’watch’ the changes that occur when GFP glows

The precise sequence of atomic movements and structural changes that occur during complex chemical transformations has been uncovered using a state of the art spectroscopic technique.

US researchers demonstrated the power of femtosecond stimulated Raman spectroscopy (FSRS), by using it to pin down the changes that occur when green fluorescent protein (GFP) glows under blue light.

GFP involves a classic intramolecular proton transfer reaction to produce its fluorescent form. This happens on an ultrafast 10 femtosecond to 10 picosecond timescale, and previously it had been difficult to perform structural measurements and determine the mechanism and pathway of any reaction occurring in this time range.

The new approach allows scientists to observe the atomic motions that occur after the GFP chromophore - the part of the molecule responsible for its colour - absorbs a photon, by monitoring the change in the molecule’s vibrational spectra. The team leader, Richard Mathies, speculates that the technique could be used in the development of photovoltaic devices and dye sensitised nanoparticles that are used to convert light into electricity. The work is reported in Nature  (DOI: 10.1038/nature08527).

The UK science minister, Lord Drayson, has published for consultation a set of principles for ensuring effective engagement between the government and its independent scientific advisers. This follows the outcry when David Nutt, the chair of the Advisory Council on the Misuse of Drugs, was sacked for openly criticising government drugs policy (see Chemistry World, December 2009, p10).

The principles state that scientific advisers should be able to communicate freely while respecting their governmental role, their advisory work should be protected from political interference, and that scientific advice to the government should be published unless there are overriding reasons for not doing so. Drayson drew up the principles with input from the charity Sense about Science, the Science and Technology Select Committee, and learned societies.

One pot synthesis for nylon precursor

A highly efficient route to cyclohexanone - a key chemical in the production of nylon - has been developed. The process uses a dual catalyst of palladium with a Lewis acid, and could simplify production of millions of tonnes of cyclohexanone made each year.

This chemical is currently made by hydrogenating phenol - a process prone to over-reduction. The team’s combination of palladium nanoparticles mounted on a solid support, and a Lewis acid such as aluminium chloride, prevents this over-reduction, and achieves more than 99.9 per cent conversion of phenol to produce cyclohexanone with 99.9 per cent selectivity. This work is published in Science  (DOI: 10.1126/science.1179713).

One pot synthesis for nylon precursor