Drinking water from sunlight and seawater

A device that can ’push’ the salt out of seawater has been developed by US researchers. Efficient enough to be powered by sunlight, the process could lead to small-scale or portable desalination devices that could provide vital drinking water in disaster zones or areas of severe drought. 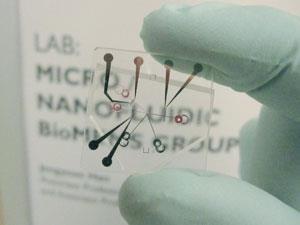 The chip can desalinate very small amounts of seawater

The team at Massachusetts Institute of Technology developed a microchip-sized device that funnels a stream of water down a channel that forks off into two separate passages - one of which has its entrance covered with a charged Nafion membrane. Salt is unable to cross the membrane, meaning fresh water flows down this covered channel while the salt is pushed down the other one. Crucially, other charged particles such as organic matter and microorganisms that could clog the membrane are also repelled.

The process requires very small water channels, that can only produce tiny amounts of water. However the end goal is to have thousands of water channels on a single chip - making a system that can produce around a litre of purified water in 10 minutes. The research is published in Nature Nanotechnology  (DOI: 10.1038/nnano.2010.34).

Ethiopia’s first national science academy was launched on 10 April. The Ethiopian Academy of Sciences (EAS) is based in the capital city Addis Ababa, and is supported by the UK’s Royal Society.

Plans for the EAS first started in 2008, and for the last 18 months the Royal Society has been helping Ethiopian scientists develop the academy’s strategic aims. Support from the Royal Society will continue until the end of 2011.

The initial priorities of the EAS are to provide the government with evidence-based scientific advice, to encourage the development of science and technology and to help with science education.

’The Royal Society is delighted to be supporting the newly formed Ethiopian Academy of Sciences and is looking forward to sharing their vision of a positive scientific future for Ethiopia,’ said Lorna Casselton, the foreign secretary of the Royal Society, as the EAS was launched.

Scientists in Germany have made a platinum complex with an unusual triple bonded boron-oxygen ligand - that looks like a carbon monoxide molecule. While BO molecules are known, they are unstable and previously have only been glimpsed in the gas-phase or in low-temperature matrix experiments.

Boron is of great interest in organic chemistry due to a deficiency of electrons and because it readily participates in multicentre bonds. This new research is a significant step forward as the platinum complex was surprisingly stable when subjected to heat and light.

Publishing in Science  (DOI: 10.1126/science.1186028), the team says that they hope the findings will lead to further studies on these species and future applications in medicine and industry.

Scientists have reported the discovery of a new super-heavy element, element 117, filling the gap in the periodic table between elements 116 and 118.

It is temporarily named ununseptium (symbol Uus), with an official name to follow in due course after consideration by the International Union of Pure and Applied Chemistry (Iupac).

The team, led by Yuri Oganessian at the Joint Institute for Nuclear Research in Dubna, Russia, made six atoms of element 117 by bombarding a berkelium coated target with calcium atoms. The new element was identified by its characteristic

The research includes data to support theories of an ’island of stability’ - a theoretical state in which hugely heavy elements can, against expectation, exist in a stable enough form to study their chemistry.

Plans to introduce a personal carbon tax in France have been dropped, after major opposition from the public.

The introduction of a tax on domestic carbon dioxide emissions - intended to encourage households, transport systems and small businesses to use less fuel - was initially delayed in January after the French constitutional court ruled that the taxes were unfair for some and that there were too many loopholes for exemption. At the time President Nicolas Sarkozy said a revised version would come into effect on 1 July (see Chemistry World, February 2010, p4).

The tax formed part of the country’s plans to significantly reduce its greenhouse emissions, and would have added approximately

0.04 per litre to petrol and slightly raised gas prices.

In 1999 the committee recommended that UK radioactive waste should be disposed of in a repository, but the government has been dragging its heels. The recent plans to significantly expand UK nuclear power generation, mean this matter has become even more urgent (see Chemistry World, January 2010, p13). 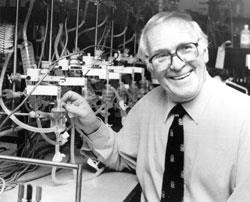 Nobel prize-winning scientist Sir James Whyte Black, whose medical discoveries are considered among the most important in the history of medicine, died at the age of 85 on 10 April.

Black earned the 1988 Nobel prize for physiology and medicine for his drug development work. He played a leading role in developing the first beta-blocker, propranolol, that slows the racing pulse of angina or hypertension sufferers and the gastric ulcer treatment, cimetidine, that became the first blockbuster drug when it achieved annual sales of more than $1 billion (?650 million).

Black’s research changed the way scientists search for new drugs, and he pioneereed the concepts of receptor theory and rational design, where molecules would be designed so that they target specific biological receptors believed to play a role in disease. Previously, hundreds of compounds would be tested aimlessly in the vain hope of identifying an active molecule.

As well as earning a Nobel prize, Black was knighted in 1981 and admitted to the Order of Merit in 2000.

The first rotaxane molecule made from DNA has been constructed by German chemists. Rotaxanes are dumbbell-shaped molecules encircled by a molecular hoop that can slide along the axle, trapped by the bulky stoppers at either end. They are useful components for molecular machines, and the researchers say that DNA rotaxanes are of particular interest as they can be made much larger than conventional organic rotaxanes - giving greater margins for parts to move.

After enjoying its position as the largest beneficiary of the UN Clean Development Mechanism (CDM) programme - through which industrialised countries invest in clean energy projects in developing countries in return for carbon credits - China now faces serious challenges in the sector.

Since late last year 86 CDM projects from China have been rejected by the CDM executive board. It has been suggested that the drop in acceptances is due to accusations that the Chinese industrial sector is abusing the scheme.

A key condition for a CDM project to be approved is that the project and subsequent emission reductions would not have occurred without input from the CDM system, a concept known as ’additionality’. It has been widely reported that the rejected Chinese CDM projects did not fulfil this additionality criteria.