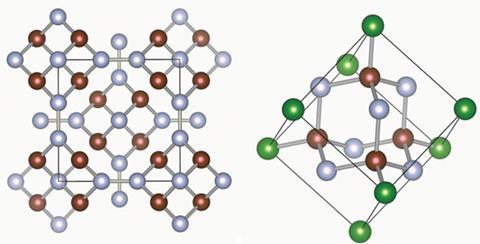 Nitrogen will form an unusual cage-like structure when subjected to high pressures, an international team of researchers has calculated. The structure, if confirmed by experimental studies, would be the first stable cage-like material in an element heavier than carbon. What’s more, it would be amongst the most energy-dense materials known.

The research was performed by a team led by Jianfu Li at Linyi University, and Yanming Ma at Jilin University, both in China. The researchers used their CALYPSO (Crystal structure AnaLYsis by Particle Swarm Optimisation) algorithm to explore nitrogen polymorphism at high pressure. ‘CALYPSO is designed for just such a purpose,’ explains Ma. ‘You give it the chemical composition and it can predict the structure of the material at a given pressure and temperature.’

Their calculations predict that nitrogen will form a polymer at pressures of 263GPa and above. The polymer consists of a repeating 10-atom nitrogen cage. The team dubbed this material ‘diamondoid nitrogen’, because of its striking similarity to the 10-carbon adamantane cage structure, which is the basic carbon sub-unit of diamond.

‘It was a surprise for me to find a cage structure for nitrogen, especially under high pressure,’ says Ma. The researchers used an ab initio random structure search to corroborate their CALYPSO result. ‘For nitrogen, the cage structure offers very efficient atomic packing,’ Ma adds.

Dinitrogen is already known to behave unusually under pressure. Despite being held together by an extremely strong triple bond, modest pressures of only 150GPa are required to dissociate this bond to generate polymeric structures with three weaker nitrogen–nitrogen single bonds instead. Dioxygen and dihydrogen, by contrast, require pressures of 1920 and 500GPa, respectively, for molecular dissociation. High pressure polymeric forms of nitrogen are of great interest as high energy density materials for energy storage, propellants and explosives, says Ma. Thanks to the very large difference in energy between nitrogen–nitrogen single and triple bonds, synthesising polymeric nitrogen and then releasing the pressure would liberate a huge amount of energy as dinitrogen reforms. ‘If we quench to ambient pressure, this could be the best energetic material known,’ says Ma.

The study is an exciting piece of work, says Julian Gale, a computational chemist at Curtin University in Perth, Australia. ‘It demonstrates the power of computational crystallography for predicting new structures,’ he says. ‘Although quantitative prediction of polymorphism is notoriously difficult, this study provides a strong indication that there is a new and very different form of nitrogen awaiting experimental discovery at high pressure.’

Work is already underway in labs in Germany and the US to try to synthesise the new material, says Ma.