American researchers have extracted colourful organic molecules from the fossilized remains of 350-million-year-old sea creatures. The orange and yellow pigments may provide a new way of tracking the evolutionary history of the ancient crinoids, or sea lilies, which still swim around ocean reefs today.

Modern crinoids resemble gaudy flowers and plants, although - like seahorses - they are animals. Their ancient fossil relatives are faded brown and black; inorganic rock normally replaces coloured organic pigments during the fossilization process.

But Christina O’Malley and William Ausich, from Ohio State University, found light-absorbing, complex organic molecules such as anthraquinone, inside crinoid fossils dating back 350 million years - the oldest such molecules yet discovered, they claim. They announced their findings on 25 October at the annual meeting of the Geological Society of America, in Philadelphia. 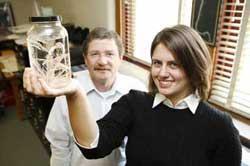 The geologists were not surprised to find the molecules there, as pigments in crinoid fossils had been studied half a century ago by Max Blumer, an organic geochemist at the Woods Hole Oceanographic Institution, Massachusetts, US.1

But modern spectroscopic techniques allowed the Ohio team to isolate many more quinones and a host of other organic molecules, as yet unidentified. The orange and yellow pigments might have been used to deter other creatures from snacking on the crinoids, said O’Malley.

O’Malley told Chemistry World that even older crinoid fossils - dating back 420-440 million years - were going to be analysed for similar pigments.

Importantly, each crinoid species studied so far has been found to contain a different combination of organic molecules. This may allow researchers to track the crinoids’ evolutionary history. So far, the only way to map the crinoid family tree has been to look for common features on the fossil skeletons. But characteristic combinations of organic molecules might prove to be a new type of biomarker. Those examined so far agree with morphologically determined crinoid classes.

"This could be a new tool for figuring out how long-dead creatures became so prolific and successful. We can’t travel back in time, but now we can look for clues about these creatures’ lives in a way that hasn’t been attempted or taken advantage of before," O’Malley said.