Out of the blue - a new phosphor for flat screen displays

Materials chemists in China have developed a compound that they believe should improve the quality of field emission displays (FEDs), bringing applications a step closer. FEDs have, for a number of years, been a promising technology for flat panel displays, but progress has been hampered by the display quality.

Jun Lin at the Chinese Academy of Sciences, Changchun, and colleagues developed a phosphor with promising colour properties for FED applications. Phosphors are materials that emit light of a particular wavelength when struck by an electron. They have long been used in cathode ray tubes, and have more recently found application in FEDs. These work by a very similar principle to cathode ray tubes, but instead of a single electron source, a grid of tiny electron sources is used, making flat-panel displays possible.

FEDs have numerous advantages over other flat panel technologies, such as the plasma and liquid crystal displays commonly used in TVs and computer monitors. These advantages include lower energy consumption, wide viewing angle, good contrast ratio and wide working temperature range. However, the phosphors for FEDs need to work at lower voltages than those in cathode ray tubes, and developing low voltage phosphors with suitable colour characteristics has hindered uptake of the technology. 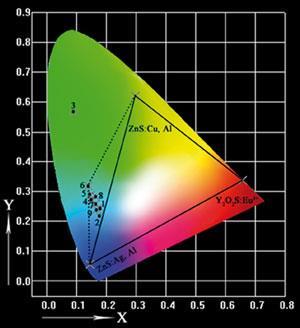 The triangle and quadrangle show the typical and enlarged colour range for FED phosphors, respectively

The phosphor developed by Lin’s team is based on Mg2SnO4, previously known as a good base material for phosphors. By doping it with Mn2+ and Ti4+, they created a phosphor with a pure blue colour that works at low voltages. Lin says that the colour emitted is out of the range of the FED phosphors developed so far, giving it ’potential to increase the display quality of full-colour FEDs’. Importantly, he adds, the colour could be adjusted from green to blue simply by changing the concentrations of the two dopants.

Lin concludes that ’FEDs have been recognised as one of the most promising technologies in the flat panel display market,’ and that improvements such as theirs will ’make the technology more viable in the future’.

Markku Leskel?, an inorganic chemist at the University of Helsinki, Finland, says that ’blue colour is one of the limiting factors in fabrication of full-color field emission displays, and this is an interesting new material, which has potential.’ However, he also notes that the stability would need to be improved for practical applications. ’The 8 per cent decrease in intensity observed over one hour would be a problem in real devices,’ he says.