Scientists have used isotopic substitution of oxygen to take a closer look at the molecular structure of water. The findings could change the way water is modelled with extra bond flexibility needing to be programmed in. This technique could also be used to explore the structure of other disordered oxides.

Neutron diffraction allows chemists to study the position of atoms in a material. By substituting an element in a sample with an isotope, scientists are able to get an even better fix on an atom’s position and determine where it sits in relation to surrounding atoms.

However, to date, chemists have largely ignored oxygen substitution. ’People thought that there was no point in trying because the ability of [oxygen isotopes to] scatter neutrons is the same,’ says author Philip Salmon of the University of Bath, UK. But, after carrying out experiments at the Institut Laue-Langevin, France, the team found the difference between 18O and 16O was six times larger than stated in the literature. ’It’s a small but finite difference that makes it plausible to study oxide materials [using this technique].’ 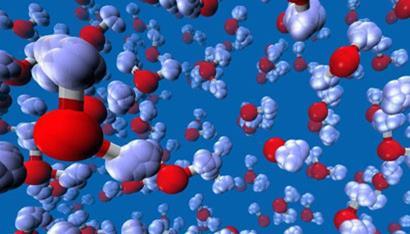 The authors began their structural investigation with water. Despite water’s abundance its structure is still poorly understood due to the role quantum effects play in its structural make-up.

There are many different models of water and the simplest treats water as a rigid molecule with no flexibility. However, computational studies show that applying quantum effects to a rigid model causes the hydrogen bonds in water to break down. ’But if you have a flexible anharmonic model you find the breakdown is much less,’ explains Salmon. With a flexible model, the molecules can increase their dipole moments, which counteracts the structure breaking quantum effects.

To determine experimentally which of these two models fits best the team carried out neutron diffraction experiments on water using isotopic oxygen substitution. They found a small 0.5 per cent difference between the hydrogen-oxygen bond lengths of D2O compared to H2O. ’If [water molecules] were rigid you would see no difference in bond

length’ says Salmon. Instead, the experimental results support the idea of a flexible anharmonic model.

David Manolopoulos, a professor of theoretical chemistry at the University of Oxford, UK, says the team’s work has refined previous measurements in this field. ’The work is interesting in the fact that it’s understanding water - the most important substance on Earth,’ he adds.

The researchers now want to test their technique on other oxide structures, such as disordered glasses. ’It would be interesting to look at materials with aluminium or phosphorus, which have no isotopes, as you could use oxygen instead,’ says Salmon.