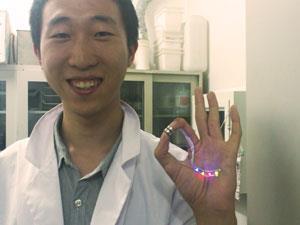 Painting a patient’s skin with a liquid metal ink could make heart monitoring much less painful and even let doctors keep an eye on a whole range of vital signs. Scientists used the ink to draw electrodes on to the skin, which could also be used to monitor muscle or brain activity.1

Currently, doctors monitor a patient’s heartbeat by detecting the muscle’s electrical signals using electrocardiography (ECG). Disposable electrodes attach to a patient’s chest using a sticky paper backing. A conductive gel between the skin and the electrode helps transmit the electrical signals to a rigid metal button that connects to the monitor. But these electrodes are so sticky that pulling them off can be painful.

Flexible electrodes that conform to the body like a tattoo2 are more comfortable than traditional ECG electrodes. Jing Liu, at Tsinghua University in China, and colleagues thought that another way to make flexible, comfortable electrodes would be to paint the electrodes directly on to the skin using a metal ink.

The researchers tinkered with the formulation of a gallium-based liquid metal ink, adding 0.3% gallium oxide. This made the ink stick to skin like wet paint, instead of rolling around like a drop of water.

The researchers used the ink to paint electrodes for an ECG on a student volunteer, Yang Yu.  They connected the electrodes to a wireless module that detected the electrical signals from Yu’s heart and transmitted the information to a mobile phone for display. The heartbeat recorded by the liquid metal electrodes was comparable to that recorded using standard rigid button electrodes.

These liquid metal electrodes can be easily removed by washing with medical alcohol, Liu says. The ink solidifies as the alcohol evaporates, making it easy to peel off electrodes or circuits.

Liu envisions using liquid metal electrodes for easy point-of-care biomedical monitoring, perhaps detecting weak signals from the brain or muscles. The ink might even be useful to draw a circuit over the whole body for monitoring, he adds.

Chemical engineer Michael Dickey, of North Carolina State University, US, says the direct contact between the skin and the liquid metal electrodes is ideal for electrical performance. However, he wonders about the potential toxicity of the metal ink.

Liu agrees that more long-term tests are needed to ensure the safety and efficacy of the liquid metal ink. However, there are some indications that gallium-based materials could be safe for biomedical applications. A gallium alloy has been used in dentistry, and radioactive gallium-67 is used for medical imaging.