The ultimate in small-scale security: a molecule that acts like an electronic keypad lock.

Israeli scientists have invented the ultimate in small-scale security: a molecule that acts like an electronic keypad lock. The tiny device lights up when three input signals - acid, base and UV light - are introduced in the correct sequence. The molecular keypad could be used in cryptography and as a tool for diagnosing disease, its inventors suggest, though it currently remains a proof of principle.

The molecule consists of two potential fluorescing units, pyrene and fluorescein, connected by a linker which reversibly binds iron. As acid, base, and irradiating UV light are introduced at three minute intervals, the molecule jumps between various charged states. The result, report researchers at the Weizmann Institute, Rehovot, is that the sequence ’acid-base-light’ makes the molecule fluoresce green, while a separate input ’acid-light’ gives a blue fluorescence. Any other sequence input gives dim light or none at all.  This behaviour, says co-author Abraham Shanzer, mimics an electronic keypad lock. The device lights up only when the correct chemical ’passwords’ are introduced. 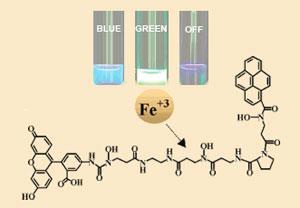 The keypad molecule: pyrene (left) and fluorescein (right) are linked by an iron-binding segment. The molecule fluoresces blue or green in response to two distinct ’passwords’ of chemicals and UV light, but reacts only dimly if the same inputs are introduced in a different order.

The molecular keypad currently has no practical use. But Shanzer told Chemistry World  that his group’s research is aimed ultimately at monitoring biochemical events in the body. A more advanced keypad could act as a diagnosis tool, lighting up to show in which order chemicals such as hormones were being released. Milan Stojanovic, of Columbia University, US, pointed out that diagnostic tools like microarrays and electronic ’noses’ already exist. To go beyond these, he said, a molecular keypad would have to be connected to meaningful inputs, like disease markers, and produce a meaningful output. For example, said Stojanovic, the fluorescence could be linked to release of a therapeutic drug.

Shanzer also suggested that his password protection concept could be used in security, to keep a document concealed. Invisible ink is the simplest form of security, requiring one ’input’ to unlock writing; this molecule needs a three-digit password before it lights up. An electronic chip might better serve this purpose, but as Shanzer stressed, ’the goal is not to mimic electronics with molecules’. Instead, he said, molecules should be used in ways electronics might not be capable of - as biosensors inside the body, for example.

Among other applications of molecular electronics, Shanzer’s group has already developed a molecular calculator, or ’moleculator’, while other researchers have used DNA for computation, even integrating a series of molecules to play a computerised game of noughts and crosses (tic-tac-toe).