Paul Lauterbur, University of Illinois professor of chemistry and pioneer of magnetic resonance imaging (MRI), died of kidney disease on 27 March 2007 at his home in Urbana, Illinois, US. He shared the 2003 Nobel prize for physiology or medicine with Sir Peter Mansfield of the University of Nottingham for his work on MRI. 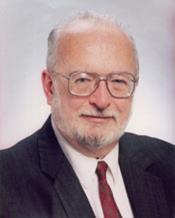 Lauterbur was born on 6 May 1929 in Sidney, Ohio, and earned a bachelor’s degree in chemistry in 1951 from the Case Institute of Technology, Cleveland, Ohio. From 1951 to 1963, with the exception of service in the US Army from 1954-55, he was a research associate at the Mellon Institute in Pittsburgh, Pennsylvania. Lauterbur’s 1962 PhD degree from the University of Pittsburgh was awarded for his independent NMR work at Mellon. In 1963, he joined the faculty of the State University of New York at Stony Brook.

It was there that Lauterbur realised how nuclear magnetic resonance (NMR) signals could be used to make a new kind of image. The NMR technique, which was developed in the 1930s and 40s, consists of measuring the radio signals emitted by an object in a magnetic field.

Code breaking
Lauterbur’s breakthrough idea was to vary the strength of the magnetic field from place to place, so that different parts of the object emitted radio waves of different frequencies. In this way, positional information could be encoded in the radio signal, and images could be constructed mathematically from the returned signals.

Lauterbur’s concept, which came to him in 1971 while eating dinner at a fast food restaurant, was initially (and incorrectly) thought by some to contradict a well-established law of optics - Abbe’s resolution limit - which states that the least distance between two points that can be resolved is one-half of the wavelength of the signal. Lauterbur’s MRI technique circumvents this limit in a particularly clever way, and can resolve objects separated by distances less than one-thousandth the wavelength of the radio signal.

His first manuscript describing the new technique was initially rejected by the journal Nature, a decision Lauterbur contested and the journal wisely reversed.

Lauterbur quickly applied his MRI method to biological organisms - he first used clams and green peppers - and showed that different types of tissues could readily be distinguished. His subsequent papers established the foundations of many imaging techniques and applications now in clinical use. Today, over 60 million MRI scans are performed each year worldwide. Along with computed X-ray tomography (CT scanning), it is the most important medical diagnostic advance of the twentieth century.

Powerful method
Although best known for his MRI work, Lauterbur made significant contributions to the development of (non-imaging) NMR spectroscopy. He published the first silicon NMR spectra and pioneering work
on phosphorus, fluorine, and tin NMR spectroscopy.

He recorded the very first carbon-13 NMR spectra and wrote a landmark series of papers on this spectroscopic method, which today is widely used in chemistry and biochemistry. More than anyone, Lauterbur proved that heteronuclear NMR spectroscopy was a powerful method for the investigation of matter, research that continued after his move to the University of Illinois at Urbana-Champaign in 1985.

Lauterbur relished being a scientific maverick, and had indomitable curiosity and courage: in his seventies, despite a stroke that made walking difficult, he stopped working on MRI and devoted all his efforts to investigate how catalytic templating effects might have contributed to the chemical origin of life. He was witty and charming, forthright and modest in turn. He was a good colleague and a devoted family man, generously giving his time to help others. On the day he was informed of winning the Nobel prize, he insisted on keeping his regular afternoon appointment with his students. In addition to the Nobel prize, Lauterbur won numerous awards, including the US National Medal of Science, the US National Medal of Technology, and election to the US National Academy of Sciences and the US National Inventors Hall of Fame.

Gregory S Girolami
University of Illinois at Urbana-Champaign, US